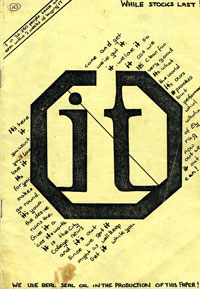 OK, this isn’t strictly one of Ely’s forgotten bands but I thought it would be fun to publish an interview I done for Chris Hunt’s Sixth Form mag ‘IT’ back around 1980. It was firmly tounge-in-cheek as the band John Glover, Mark Pettifor and myself were in were, well basically crap and could barely hold a guitar chord between us.

We got together in the late 70s, 3 friends with nothing to do in Little Downham of an evening. Mark’s parents put up with our noise for a number of years but never complained. As I mention we were crap but Mark’s parents always gave us encouragement.

I went to Ely Sixth Form in September 1979 (I dropped out some six months later) and met Chris Hunt, he was doing a new school mag and interviewed me. Here is that tongue-in-cheek interview…

A starling and revealing interview with Carl (spelt with a ‘K’) – ‘The Bottom’ Bedingfield, bass guitarist of the Sokkets.

Yes, at no expense spared … well not much anyway, we bring an almost exclusive interview with the immortal and legendary not Paul McCartney. In those obscure days of the early ’80’s Karl riveted to fame with his group the Sokkets, who have recently been appearing at the local Fordham coffee bar but who now find themselves unexpectedly free for the rest of the decade. This interview tells of the music (?), lives, loves and hat measurements of the amazing Sokkets. (Look out for hidden drugs references).
The group itself, Karl tells us, was formed without him back in those obsolete days of spring ’78. The days of flower power, the hippie and Don Revie had a large influence on the band, in this it’s early development. The original line-up was Mark Pettifor, (lead guitar and backing vocals) John Glover (lead vocals and Harmonica) and Paul Cornwall on bass guitar. After the arrest of the bassist, Cornwall, on a drugs charge, Karl entered the group. ‘This was’ Karl admitted later ‘my big break and I leaped at the beckoning chance of stardom’. 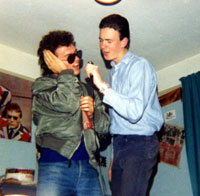 The rise was slow, with constant rehearsals in the bedroom of the lead guitarist, for which they occasionally earned the applause of his family downstairs. This was an early indicator of their great commercial potential. It was at about this time that they recorded their first LP ‘Live Wires’. Although it was a commercial failure, it did receive immense critical acclaim from the group itself. “It was brilliant”, stated a modest Karl after the first recording session.

Unfortunately, the barman did not know when he was onto a good thing and just threw them out.

Their second LP ‘Enquire Within’ was recorded in the same manner as ‘Live Wires’ and although a big release was planned, culminating in the signing of a recording contract at the gates of Buckingham Palace, nothing ever became of this.

Content with two LP’s under their belt, the Sokkets decided to join the club and pub circuit, doing some surprise concerts. Their first surprise concert was held in a pub, into which they had wandered one night after rehearsals. Unfortunately, the barman did not know when he was onto a good thing and just threw them out. Although no further gigs are planned, a major rehearsal at Little Downham Village Hall is on the cards, and the prospect of a recording contract, Karl tells us, is imminent. 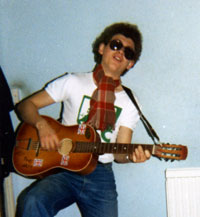 The group list foremost among their influences, alcohol and themselves – the Sokkets. With the line-up now finally settled – despite the absence of a drummer – and with fame and fortune safely in their pockets, all that is left for them to do is to make a spectacular breakup amongst lawsuits and to stage a comeback in two years time.

No matter what happens to the Sokkets, their music will live forever – the classic songs ‘Don’t blink at the ink’, ‘We hate James Bromley’ ‘X2-04’ and ‘To be Frank, Brian’ will join the immortal classics of the Beatles, the Stones and Wreckless Eric?

‘Thank you Karl, you can go as soon as you’ve been untied’. Chris Hunt 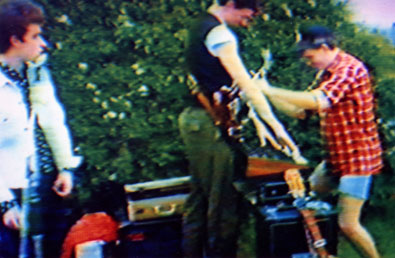 Our featured tracks by the Sokkets are pretty rough as they were recorded on a little radio cassette player (remember them?) on a super cheap blank cassette around 1978/79. The songs are ‘We hate James Bromley’ and ‘My Fleas Got Dogs’ which was stopped mid-way by Mark’s sister Janine as she said the ceiling was shaking. Be warned these are as bad as I said!

We Hate James Bromely
This was a guy at school we didn’t like for some reason, can’t remember why.

My Flea’s Got Dogs
John done a lot of make-them-up-as-I-go-along vocals, this one was fun.

What it means to be American

Ely’s Forgotten Bands: This Property Is Condemned Scroll to top