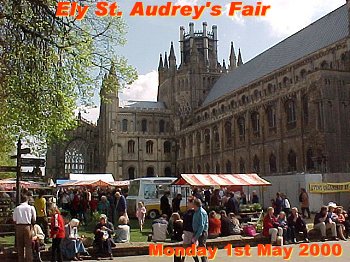 Origins of The Fair

Queen Etheldreda, having been given Ely as part of her dowery, eventually renounced the world and gave her life to the worship of God by founding a Monastery at Ely and becoming it’s first Abbess.

Her death in late June in the year of our Lord 879 was commemorated by holding a Fair, St Etheldreda’s Fair, which became commonly known as St Audrey’s Fair, and introduced a new word into the English Language, “tawdry”, meaning a small gift or present. 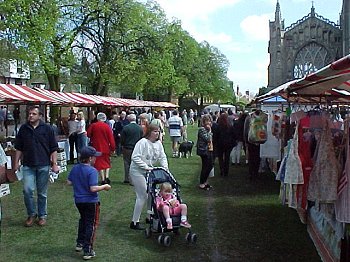 successful it was again staged in 2000.

The Fair was held on St Cross Green on the North side and in the shadow of the Cathedral and on the front part of Palace Green which is immediately opposite the West Door of the Cathedral.

It took place on Saturday and Sunday, however, Saturday was virtually rained-off, whereas Sunday was blessed with fine sunshine. Many local clubs, societies and traders had stalls at the fair – as our exclusive pictures show: 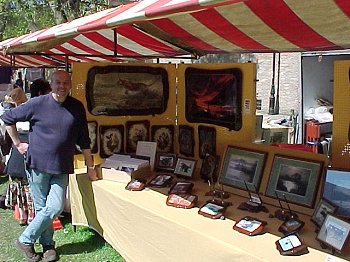 “Man By Your Stand” 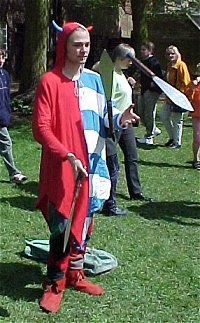 Here we see a devilishly good juggler Doug Bleazey who looks in danger of losing his toes!

Luckily his toes remained in one piece, unlike his costume which is made from two halves of previous costumes initially worn when first practicing his act.

Check out Doug’s own website at www.bleazey.co.uk – he also does a “gentleman juggler”. 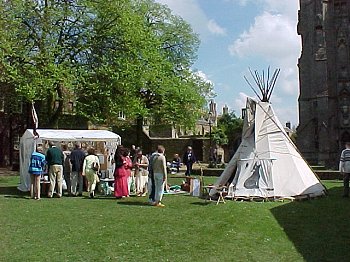 The Outlaws set up their stand well away from these here indians. 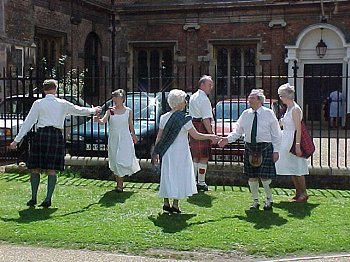 And now we take you straight over to the Nairn Highland Games ……actually it is the local Scottish Country Dance group strutting their stuff in front of the Bishops Palace.

And what lovely dresses! The women’s aren’t bad either! (boom boom) 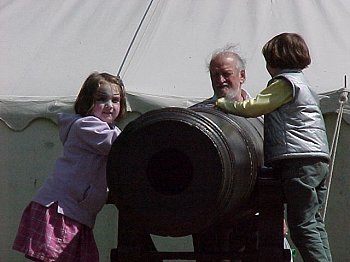 Two young revellers threaten to blow your reporter away if he continues with this badly punned report.

OK – some history. The Cannon on the Green was captured from the Russians in Sebastopol and given to Ely City by Queen Victoria in 1860 after the Crimean War. Her gift was in recognition of the successful formation of the Ely Rifle Volunteers. 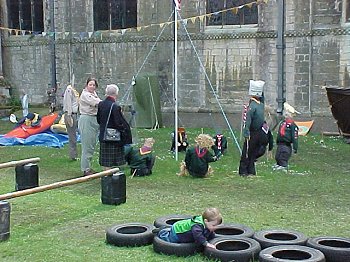 There is no truth in the rumour that the local cub scout group is so short of members that they have resorted to enlisting a few scarecrows to make up the numbers. No sir, the local cubs are no dummies! 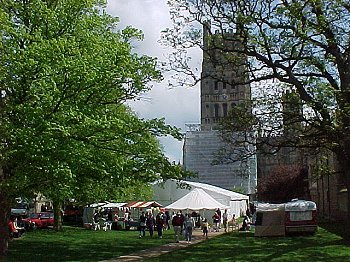 Final view of this year’s event as we look back to the Cathedral from the Green.

As you can see, the main entrance to the Cathedral is currently being renovated behind curtained scaffolding, and let’s hope the renovated and restored St. Audrey’s Fair becomes a yearly event in the the Ely Calendar.

A Nation of Sissies – Historic Article by Anne DeBondt