You are here: Home1 / Contributors2 / Ely’s Forgotten Bands: This Property Is Condemned

Ely Online has had a long association with many Ely bands over the last twenty years, some we were in, some were just good friends with, others we just dug! We thought it would be good to highlight some of these long forgotton bands by digging into our own press clippings and Ely Standard’s microfiche at Ely Library. So this is the first of an infrequent feature called ‘Ely’s Forgotten Bands’. 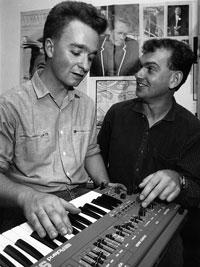 To start off I decided to highlight my own little foray into 80s elctronica with a project called ‘This Property Is Condemned’. The project stems from the mid-80s and was a collaboration with John Glover.

I still recall the day I re-discovered early 80s electronic music, sure I had been aware of it since ’79 but being so heavily involved in the Mod revival from 1979-1984 I dismissed any other music that didn’t conform to my version of mod and that included just about everything! Personally I blame Paul Haig for my departure from the mod way of life – one Friday evening while watching a long forgotten Channel 4 show called ‘The Switch’ I saw Paul Haig performing ‘Blue For You’, this guy had the most amazing haircut, he looked cool and the music was amazing! Soon after this life changing encounter I brought a Roland SH101 and a Boss DR-110 Dr. Rhythm Graphic drum machine (buying the drum machine and synth actually led me to joining another Ely band called Fearful Wedding but that’s another story) and borrowed a Fostex X-15 multitrack recorder. I convinced John to put down a couple of vocals and what resulted was a few tracks that bacame a tape demo called ‘The Guff’ which got the attention of Ely Standard’s Lee Smith who wrote the following feature…

‘We just want to be taken seriously’ is the message from Karl Bedingfield and John Glover.

For over five years both 21-year-olds have been involved in the local music scene with different bands. As a sideline they have branched out to experiment in their own field of electro rock, far removed from their earlier anti-society punk days with The Sokkets. They first got together when they were at Littteport village college, and since then have been involved in a succession of bands each time varying their musical tastes.

Karl has been the main inspiration behind the latest trend, borrowing a porta studio and using his keyboards synth and drum machine to come up with a sound that crosses between New Order and Bronski Beat.

Once the sound was sorted but Karl contacted John to add vocals to it.

First on the production line was, in my opinion their best track, The Death of Taste, based on a poem written by John sometime ago.

Backing this up is a heavy synth beat number Smitten By You and an instrumental Industrial Vandelism.

Both have contacts with Ely bands Fearful Wedding and The Approachable Pigeons, but insist that this is only a sideline.

All the mixing and recording was done in Karl’s bedroom, at 40 Ely Road, Little Downham and Johns flat in Broad Street, Ely. So how did they manage to achieve what, for a first time attempt, was a professional sound? ‘Our first go was not really what we wanted’, Karl commented, ‘but we felt that we had something there and improved on what we had.’

The first tape was in fact completed in only an hour and a half.” In a studio even this would have cost a small fortune.

I was immediately struck by the way electro sound and the lyrics blended together. John admitted that he got most of his inspiration from the likes of Elvis Costello and felt that their earlier anti-establishment tone was still very much in evidence.

A different experiment, but one that has paid off

More than succeeding in the studio the two hope get things moving on the live side but need to find keyboard player to help out. 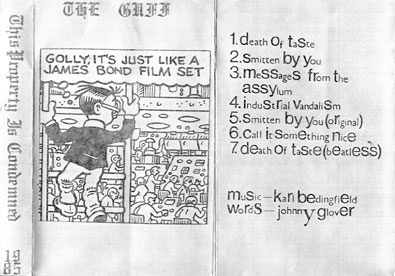 In the wake of Paul Hardcastle’s success with 19, Karl had a mix with a speech by Rex Harrison, from the film My Fair Lady, adding echo and similar modernisations. A different experiment, but one that has paid off.

John felt that being well known in the city was hindrance. Many people had seen them in various guises at the Rugby Club, but were not prepared to think them seriously as musicians.

But now the boys are back with a more commercial sound that is sure to attract many new followers. Lee Smith

We had fun with the project but this was the only time John & myself collaborated on a project. John continued with ‘The Approachable Pigeons’ and I stayed with ‘Fearful Wedding’ which later name-changed to ‘Refugee’. After I and David Badcock left they became ‘Crossland’, but thats another story.

Podcast: This Property Is Condemned’s Music

Our featured track by This Property Is Condemned is called ‘Death Of Taste’. We are not 100% sure if this was the finished track or a rough mix as this is the only cassette we can find. Anyway have a listen.

The complete track-listing for ‘The Guff’ was: