Back in the early 1990s John Glover & Karl Bedingfield had been gathering features for a local music magazine we were planning to publish. They had interviewed Higher Breed and Chris Williams of Crossland had kept a diary of the band’s experiences on the Radio 1 roadshow.

They needed more features, and a good place to start was long since closed Hedgehog Records in Ely’s Market Street. The proprietor, David Cook, had always been keen to promote local bands and stocked all the demo tapes. John stumped up the fiver to buy the latest demo tape which happened to be Rolled & Ready by The Excitable PJ Maybe.

We loved their 60s garage punk and arranged a photo shoot and interview. On Sunday afternoon June 30th 1991, we met with the band in Little Downham and done the shoot. That’s essentially where it ended as we never managed to finish the magazine and the once thriving music scene was collapsing around us.

Fast forward seventeen years and I come across a few surviving negatives from that shoot and approach Antony Turner, one time guitarist of the PJs, to ask if he would write about the band – this is his story:

Its like one of them ‘Rock Family Trees’. Justin was my best mate at school, and we go the idea of learning instruments in the 4th year at school. Nothing much happened until we were at Ely 6th form, when I made friends with 2 lads from Soham school called Jim & Darren. They had just secured a rehearsal space with Nutmeg and were excited.

This inspired me to relearn guitar (I had a few lessons at my previous school) and soon got into playing along with the Ramones. At that point, Justin was learning Bass and we had got together with Josh Read (Maybe’s singer) and Tom Jelico (Josh’s cousin) and were just playing Sex Pistols version of Johnny B Goode over & over again, along with a self written tune, can’t remember, calling ourselves The Bacons (Ramones inspiration). 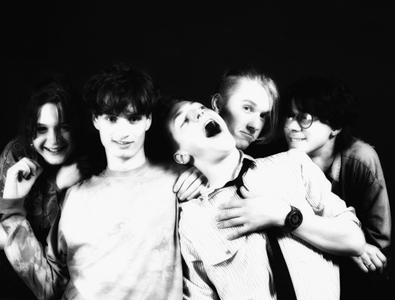 Another Marvelous Thing Happened In Ely

Anyway a few months later after Justin was playing with Professor Lojik, I was jamming with a college friend called Chris Froment and Josh as a 3 piece, me on guitar and trying to sing, Chris Froment on bass, Josh on drums. It was at that point, around summer 1988, Josh mentioned that there was a really good drummer called James Farmer so we tried him out with a simple 3 chord tune and he was good. James lived in a large property which had an empty out-building (the old Cheese Factory) with electricity. After some persuasion James convinced his parents to let us use the building as our rehersal space. At that point we invested in a PA.

I think that year Nutmeg won the Cambridge Band Competition. At the same time another marvelous thing happened in Ely, by the name of Mark Gamble music. The ONLY shop you could go in, try out an instrument, have a fag and a bit of a jam. This shop was now the meeting place on a Saturday morning for most people wanting to play music, even if it was just to drop in to see what he had in stock, or what dealership he’d got, or some advice. This allowed most of musicians in the Ely area to relax and meet up. Mark Gamble Music was where the most of the Ely music scene started, grapevines happened and gigs were promoted. Ely seemed to be the centre of the music universe.

PJ Maybe started writing tunes In the summer of 1988, as I was the only one working at the time I financed PJ maybe’s first recordings – the Rolled & Ready EP. We recorded the demos at Flightpath studios (£90 for 10 hours, which the last hour was just mixing).

At this time Kathy Heald joined us on keyboards for these recordings. Kathy was Josh’s girlfriend, and had recently done some keyboard work with Justin’s new band, Threehead, which had risen from the ashes from Professor Lojik). Kathy’s input added a fuller, and lets face it, a more accomplished feel to the band – the band was now called The Excitable PJ Maybe.

Kathy’s presence worked really well, especially when we heard the finished recording of tunes like Hell Bent Hippy, Round, Mad Cows and the samples on M25.

Around this time a lady called Val Maher was organising gigs for her son’s band The Stand along with other bands such as This Replica, Nutmeg, Threehead, ourselves and a new U2 inspired outfit formed by the Blickham Twins named Higher Breed. Her next organised gig was at Centre E in Ely. Centre E was a good place to hold gigs as it’s capacity was a 100 or so. On a successful night it was better than established locations like Burleigh Arms, Man on the Moon, etc.

We weren’t sure how the Rolled & Ready EP would be received on it’s release but we soon sold out of the first 40 odd copies within 2-3 weeks. We were even told of an incident at Soham Village College by a friend that when she walked across the school field she heard our demo on 5 separate occasions by different people. 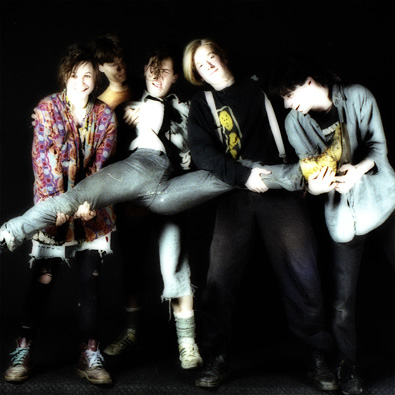 We Blew Their Minds

New tunes were being written all the time and within 6 months the first songs in the set were being replaced by newer, faster, more technical and tighter tunes, like £7.90, death to yer Mother, GRTP and Subsonic which were reviewed in the Music Scene section of the Ely Standard.

Gigs were thick and fast and by the beginning of 1989 we were fairly regular in Cambridge. One of my favourite gigs was when we supported Keith’s Dad in Ramsey. Fletch, of the Nightjars (whom I joined a few years later) said we had a really good set and was very impressive. We were STILL selling Rolled & Ready at gigs.

The Exitable PJ Maybe were being booked in Cambridge by loads of people, and when we were told by the Blickham twins that they wanted to play a ‘Showcase’ gig at The Square at Harlow with us we jumped at the chance. All we had to do was sell some tickets, get the people there and the first to turn up headlined. We sold all our tickets very soon and organised the buses. We didn’t get there first – guess who did!

We played mostly new tunes, and we blew their minds. The manager of the Square said he would definitely see us again. He also told our manager that halfway through the first song he ordered the sound and light man to give our set full lights and full sound as if we were headlining! 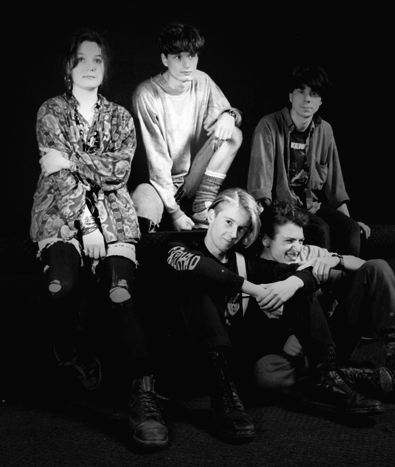 The next week we played at Ely in Needhams Hall riding VERY high from the triumphant gig in Harlow, and for the very first time we were allowed by the organiser to play an encore. That night our manager drove some equipment back in his car and crashed it in a ditch which ended up on fire. Equipment, money & contacts. everything gone!

We scraped enough money together – as 2 of us were working at that point – to record a good, well engineered demo, which was never released.

Our last gig ended in shambles as a 4 piece with a rubbish sound, and all of us very drunk indeed. We didn’t go out in a blaze of glory – we burnt out! We were pissed off with everyone just booking us as a support just to get the punters in and not asking us to headline.

Between 1988 and 1992/3 Ely had very vibrant music scene created by a few exceptional bands and individuals that wanted to put Ely on the map. It may never happen again in Ely again as I sensed that it was definitely a one off. 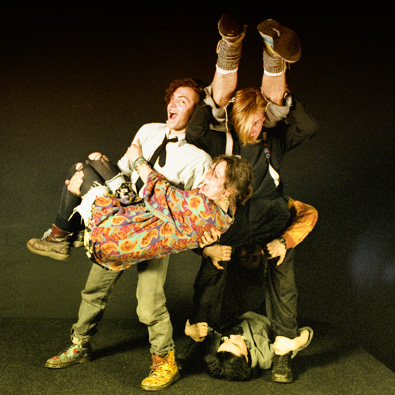 After PJ Maybe I joined a reformation of the Nighjars and disbanded after a few years, with a final of the Cambridge band Comp under my belt. I then went onto Cambridge Perennials Pogul Magee, which disbanded 3 years later. I’m now thinking of looking yet again for other mid 30’s old punk rockers to jump about on stage with.

This is (as far as we know) the complete discography of The Excitable PJ Maybe. All recordings have been transferred from original audio cassettes (CDs were just too expensive to produce for bands back then). Track 1-6 are from the first demo ‘Rolled & Ready’ with the remainder previously unreleased. It was surprising to find these tracks had never been released. Antony wrote: ‘I think it was just as we split, Josh and Cathy being at College, and also Josh fighting with James, we just didn’t see the point and the hassle in releasing it. It was recorded right at the (bitter) end of our “career”.

Original comments made when this article was first published:

4 Ideas for Entertaining Your Family at Home

The Meaning of Swearing Scroll to top