You are here: Home1 / Contributors2 / When Channel 4’s Time Team Excavated In Ely

September 2000: Ely took a step back in time when actor Tony Robinson (pictured left) brought members of the Channel Four Time Team to the archaeological dig in Broad Street. The documentary team visited the site while members of the Cambridge University Archaeological Unit carried out work on the dig.

Work began on the site recently and lasted 20 weeks. During that time, archaeologists were expecting to uncover evidence of activity from the Bronze and Iron Ages. Roman remains, including coins, clothing decorations and statuettes, have previously been found in Ely. 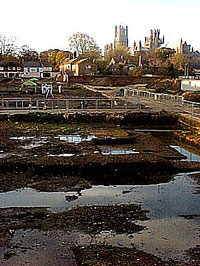 The remains of Roman docks have also been uncovered in Stuntney

The remains of Roman docks have also been uncovered in Stuntney. Archaeologists are hoping the dig might reveal a previously unknown slice of medieval history from the Riverdside and Broad Street areas. There has been speculation that the riverside around the old Jewson site may have been a hive of commercial activity during the building of Ely Cathedral between the 11th and 13th centuries.

Among other things, the archaeologists will be searching for the remains of medieval warehouses, monastic in origin, which are suspected to have been situated along Broad Street. Right up until the 18th century, barges used the riverside wharves to load and unload their goods when Ely was an important trading town. 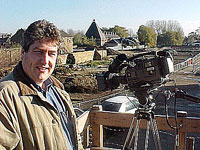 Alison Dickens, the director of the archaeology unit and dig leader, said: ‘This is an especially rich archaeological area and we will have 11 archaeologists working here for five months in the hope of revealing all its secrets. Using a combination of detailed, in–depth trench excavations and wider sampling of the entire site, we are confident that, at the end of the excavation, we will be able to construct a full picture of the historical development of the life and work of the area across the centuries.’

In co–operation with the university archaeologists, East Cambridgeshire District Council has erected a public platform at either end of the site to enable people to watch the progress of the dig. Interpretation boards are also on the viewing platforms. Any actual Time Team filming would be subject to circumstances.

Alistair Kitching, September 2000: Ely’s Broad Street archaeological site is proving to be a fascinating and surprising addition to what was already a wealthy historical landscape. I decided to have a nose around during the site’s Open Day.

Despite fairly miserable weather, and slate–grey skies promising no real let-up, it appeared that several Ely residents had also decided this was a worthwhile alternative to the usual Saturday routine.

‘The reaction has been terrific,’ Alison Dickens of the Cambridgeshire Archaeological Unit told me. ‘There were at least thirty people queing up outside the gates before we opened up his morning and five hundred more have turned up since, and it’s only lunchtime.’

Channel 4’s ‘Time Team’ were in evidence in the shape of Phil Harding, but it certainly seemed that the crowd were there for the archaeology rather than the stars, and they will not have left disappointed. Tours led by members of the CAU explained the site and helped everyone make sense of the trenches and what, at first glance, simply looked like a badly ploughed-over field. 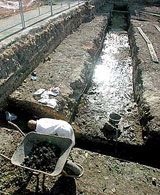 At the top of the site (roughly, a 180m x 25m long rectangle which starts at the Jewson gates and stretches up to the wall on the quayside) are the remains of houses dating back to about 1250, with possibly something even earlier coming up underneath. In the middle of the site is an area of post–medieval industrial activity which seemed to me to be fairly complex and is obviously the subject of some hard work and much speculation at the moment. But it’s the river end of the site that has got the CAU buzzing at the moment.

In around 1200, the river was diverted from it’s previous course (where it had run much nearer to Stuntney) to hold it’s current position. The apex of the meander that flows into Ely touches the south–eastern edge of the site.

Here, three large channels have been uncovered, dating from 14/15th Century, pointing from the river in the direction of the city centre. In the dark earth you can make out the shadowed silhouette where a cambered jetty separated the channels. These jetties probably housed mini–cranes to help unload the flat-bottomed barges that travelled up into the channels.

Where the channels end, there is evidence of a very busy complex of workshops and studios, utilising the goods, the sedge, the clay, the cloth, etc, all working with the resources that were coming up the river. This period essentially represents Ely at the peak of it’s wealth and status: a bustling Medieval city, topped by the focal point of the cathedral. Yet, it was much more than that; what the dig has uncovered is a thriving and industrious area away from the central eccliastical hub of the city, filling in a much richer and deeper background to a town which has only really increased in size since the middle of the 20th Century.

Seductive as this picture is, it isn’t all there is to the site, for the most important find so far is the kiln. ‘It’s the star of the site’, said Alison.

‘If we’d found nothing else, then this would’ve made all the effort worthwhile.’ In the midst of the workshops at the top of the barge channels lies an oval kiln, the only kiln of any date ever found in Ely. Babylon Ware, a red pottery fabric with a deep brown glaze, has long been associated with the Ely area but no-one had been able to pinpoint where it might actually originate from. Along with other varieties of pot, it now looks almost certain that that search is finally over. Similar pieces have been found across many counties and this increases Ely’s reputation as a centre for much activity.

It paints an exciting picture of Ely in the mid 1400s as an important and burgeoning trading spot, using the fens as an almost limitless resource (before they were systematically drained and reclaimed for agricultural purposes).

Historical comments on this article:

Just caught up with this episode and think I may be able to identify Lady Cassandra and her kinsman Robert le Blund. Cassandra was the daughter of Robert de L’Isle of Rougemont, son of Robert de L’Isle (son of Ralph fitz Olaf, Chamberlain of the Bishop of Ely) and Galiena le Blund, daughter of William le Blund, Lord of Ixworth. Around 1204 Cassandra married Richard de Argentein, a royal steward and noted Crusader, of Little Wymondley, Herts., to whom she brought the manors of Newmarket and Exning as her marriage portion. She had died before 1228 by which time her husband had married again. Robert le Blund was more than likely her cousin once removed, i.e. son of Herbert, son of William le Blund, Cassandra’s great grandfather. I posted this information with sources to Soc. Gen. Med. in 2004.