Motto – “Despite the Elements”

Probably dropped the second greatest tonnage of bombs, approximately 23,000 tons. The squadron lost 110 aircraft (2.4 percent) in these raids. Suffered the most loses in the whole of Bomber Command. The only squadron to lose more than 200 aircraft in the war. An additional 22 Lancasters were destroyed in crashes.

“A superb heavy bomber, the Lancaster is one of the classic heavy bombers of the Second World War. It was extremely robust and had the largest bomb bay of any aircraft in World War II.”
Rénald Fortier, Curator of Aviation History, The National Aviation Museum

The Lancaster was, without a doubt, the most famous British bomber of World War II. Manufactured by A.V. Roe & Co. in wartime England and Canada, the Lancaster – or “Lanc” – was a replacement for the unreliable and under-powered Avro Manchester that finally ceased production in 1941. But the Lancaster suffered none of its predecessor’s faults.

Designed by Roy Chadwick, A.V. Roe’s chief designer, the Lancaster was to become the backbone of the British Bomber Command. As such, the dependable four-engine aircraft was known for its relative speed and high ceiling, and more impressively, for its ability to carry enormous loads for its size. And, while the Lancaster was somewhat vulnerable to enemy fire, it soon garnered a reputation for its amazing durability nonetheless.

The bomber was so successful in its role that it took part in almost every major bombing raid of Europe from mid-1942 until the end of the war. But the Lancaster wasn’t only successful in it missions, it was also a hit with its seven-man crews – for despite being noisy, drafty and less than luxurious on long hauls, its strength and reliability outshone any shortcomings. It was also a “delight to fly”.

As the “Lanc” evolved during wartime production, successive models were equipped with larger and larger bomb bay doors – allowing it to accomodate the heaviest bomb of the war, the 10,000kg ‘Grand Slam’. After the war, the Lancaster received a new lease on life serving in various roles – from maritime patrol and search and rescue, to navigator training and photo reconnaissance.

Comments on this article:

I am trying to discover more about Squadron Leader Anthony Mills (118465 RAFVR) whose Lancaster Mk 1 (NG332 IL-D) was mistakenly shot down by allied gunfire,(possibly from the 184th AAA Gun Battalion who had been transferred to Namur and the Meuse river 10 days before) on 1st Jan.1945 whilst returning from a raid on Vohwinkel.

The plane (which he piloted) crashed on farmland near Emines, 5 miles north of Namur in Belgium, no survivors, and all the crew are buried at Leopoldsburg War Cemetary. 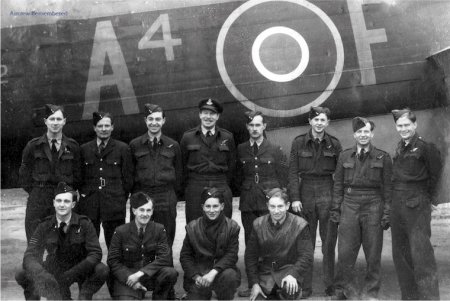 Any information from anyone who knew any of these would be of great interest.
Thanks
Patrick Mills

I am writing to anyone
out there who may be able to help me trace any living relatives in connection with the crew of Lancaster mk11 KO/J LL622 from No. 115 Squadron, RAF Witchford.
They lost their lives on the night of the 30/31 March 1944 on the Nuremberg raid.
Their names were – F/S R.Thomas, Sgt R.F.Taylor, Sgt D.Atkinson, Sgt J.H.Kensett,
Sgt F.Hawksworth, Sgt P.Jack, Sgt H.Kendrick.
I am the great-nephew of Sgt F Hawksworth.
E-mail: Mr. Paul Hawksworth at hawksworth@themeadows04.freeserve.co.uk

MY grandfather
belonged to 115 squadron, during the secound world war. He joined in 1942 and became a engineer working on the ‘Avro lancasters’. Although he does not recognise the name Jim Murphy. His name is Gerry Gilham. he flew out of Witchford in 1944 to fly to Billbase, i think it is called, in Eygpt. His wing Commander was Bob Annan and Group Captain Sims. It would be much appreciated If you could contact me back before Saturday 6th as he leaves that day. Any response would be most gratefully received.

—–Original Message—–
From: Philip Nash
Sent: 03 July 2002 22:49 To: 115squadron@elyonline.co.uk
Subject: Extra information
My Grandfather has just given me some more information if anybody has any information about a Paul Baker, who lives in Newcastle Predhoe? Thank you so very much for getting in touch my Grandfather is most appreciative.
Robbie

SIR/MADAM
I’M TRING TO FIND OUT ANY INFO ON SGT T.C WATSON, 1594037 WHO SERVED WITH 115 SQUADRON, HE WAS AN AIR GUNNER(REAR). HE WAS KILLED ON 24/25 MARCH 1944 ON THERAID TO BERLIN. I’VE GOT ALL THE STANDARD INFO BUT I’M TRYING TO FIND OUT FORM PEOPLE WHO ACTUALLY SERVED WITH HIM.