Threehead and the Ely music scene 1989-1992
By Justin Norman

There was a short time in the late 80s, early 90s, that it seemed that everyone in Ely was either in a band or hung round with people who were, and I had the good fortune to be part of that. Christ, even the Ely Standard had a music column, written by Geoff Pulham.

My small part in that started several years before…

Ant Turner came to Ely from Boston about 1984/85 and we were in the same class at school, along with Ian Turner who had come from Littleport when the schools merged. I remember we were probably the last three Mods in the world, and Pat Brandon lent us his music room to ‘rehearse’ when we decided we were going to be the next Jam.

It never really got off the ground, and we went away to learn to play some instruments, although I did write the lyrics to Ashley Thompson’s O level music piece, borrowing heavily from New Order’s Everything’s Gone Green, I think, which a girl called Natalie Watt’s sang. Ash was a bit of a musical genius and, although we were poles apart taste wise – he liked Queen, and Queen only, he was a massive influence for me.

I had discovered John Peel by now, and pretty much followed a well trodden path from thereon. I heard the Smiths and couldn’t get over the sound of Andy Rourke’s bass on ‘What Difference Does it Make?’, playing it over and over and driving my parents mental. In the end I bought a bass and got my uncle to teach me, and within a few weeks Ant Turner and me were trying to figure out chord sequences from his older brother’s Indie record collection.

Live music was becoming more accessible, we were venturing further afield but more bands were coming through Cambridge on tour, and the Junction had opened as live venue, so we were all there, down the front at the Wedding Present, or Ozrics at the Sea Cadet Hall and wanting a bit of that. Just a bit mind….

The year we went to 6th Form and met Darren and Jim, who had just formed This Replica. I remember a demo they lent me of a song that was Jim playing drums and Darren singing something like ‘life is cruel and then you die…’ Yep, we were a cheerful lot. Chris Scurrah was This Rep’s bass player and had a brother in Soham band Nutmeg, who were just starting to take off – and the two bands played a gig at Needham’s Hall, which the whole 6th form seemed to be at.

It was around this time that I was asked to join Profesa Logik by some blokes from Sutton who I had met through my then girlfriend, Trish Maher, and I think I managed to find Mike Dickens who was the only person anyone knew who could play drums. We played about 2 gigs of some really terrible thrash punk with a bloke called Anarchy Atkins screaming over three chord thrash. I wasn’t into the music, didn’t understand it and the band soon fell apart. Trish’s two brother’s played in a Clash-covers band called the Stands, but it was only a sometime thing for them.

Logik’s Ogg Smith and I hit it off and we formed a band with Mike taking over singing and probably the most talented of all the local musicians Liam on drums. I started to jot down some lyrics, by now I was starting to get more into some Goth Rock stuff, New Model Army and Fields of the Nephilim that sort of thing and with Ogg being Hawkwind’s biggest fan it was a fairly natural direction to take.

Ant had left 6th form, but had hooked up with Josh Reid, who I had hit over the head with a bass during a gig with Logik in Sutton, and Christian Fromont on bass. I think Fromont bought my first bass off me when I bought one off a bloke called Ben who was in a band from Lt Downham, who’s name I can’t remember. Thus formed the Excitable PJ Maybe, with Ant aping Johnny Ramone on guitar. Ant, Josh and I had not long seen the Ramones at the Astoria in London. Josh had told his parents he was ‘having tea’ at mine and we had an epic on the way home, running out of petrol and being rescued from the services by someone’s dad. 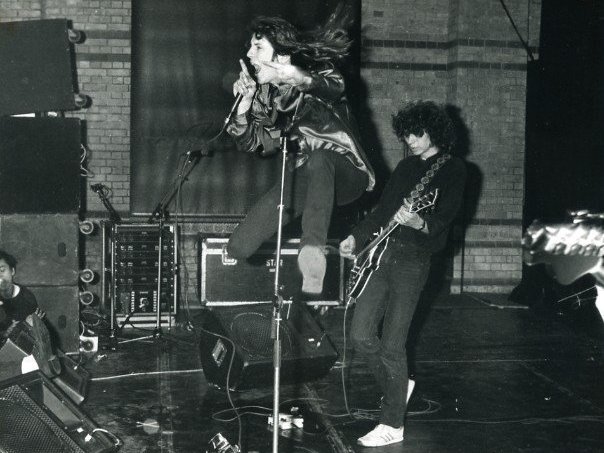 All this time Nutmeg were going from strength to strength, talk of record deals spurred us all on, and they used This Rep as their support wherever they went, despite the contrast between Nutmeg’s Stones-cum-Stooges bluesy rock and This Rep’s early Cure meanderings. Some of us even walked to the Boat race in Cambridge to see them.

ThreeHead a put a demo together at Flightpath, recommended by This Replica, and we bought Cathy Heald in on keyboards to add a finishing touch, but for whatever reason she didn’t become a permanent feature and joined PJ Maybe, but then she was Josh’s girlfriend at the time. We hadn’t played a gig by this time, although there used to be a crowd crammed into Mike’s Mum’s dining room every Wednesday night to hear us putting stuff together. We only came up with the name ThreeHead when Ogg and I were mixing the demo, seeing it on a tape deck “Three Head Motor Head”.

We were gigging quite a bit shortly after this, Ogg and I having managed to lay down a dozen or so tracks, we played at Needhams and then moved onto Cambridge as there wasn’t really anywhere to play in Ely.

And that may have been the crux of it. There were other bands around, Color Factory were a very good poppy punk band, who we played at the Rugby Club with, but there just wasn’t anywhere to play regularly in Ely. With hindsight if one of us had picked up on it and badgered somewhere enough to get a weekly slot for a couple of bands somewhere the scene might have kicked on, but most of us were just interested in getting out of Ely and into Cambridge, and when you consider the hundred or so bands that entered the Cambridge Rock Competition in 1988 you get an idea of how fierce the competition for gigs was. Even Nutmeg had to play in such exotic places as Thrapston.

Nutmeg’s record deal bombed not long after they had supported the Hothouse Flowers, who had just had a big hit with ‘Don’t Go’, from what I remember the company and only ever really been interested in Tom Dalpra, the vocalist. Nutmeg had cut This Rep loose, and they had developed a much rockier, psychedelic sound.

Ash Thompson died tragically in summer 89, along with another friend and I took it pretty badly, this came through in ThreeHead’s music, which we shook up at this time, dropping most of what had gone before. Inspired by Hawkwind’s ‘Space Ritual’ album we tried to put together a constant wall of psychedelic noise, and at this time I wrote ‘Drowned’, which I’m still pretty proud of after all this time! I had heard Spacemen 3 on late night telly and bought their first album and then followed the trail back to Suicide’s work and was trying to move ThreeHead in this direction.

All this despite the constant distraction of Christian Weston, who had become my mascot – on one occasion I had to be hauled onto the stage after commenting to someone in the bar how much the band sounded like the one I was in. He also had some doing in me turning up to rehearsals with a penny whistle rather than my bass and announcing we were ‘going folk.’ he was our biggest fan, but I think a constant source of frustration to some of the others…

Ogg’s girlfriend Sarita had started managing us and we were starting to pull in some big gigs in our own right, rather than supporting others – we played the Boat Race and half the old hippies and street drinkers in Cambridge turned up, giving us a standing ovation. If 25 people can form a standing ovation.

On the strength of this unprecedented success we recorded a second demo at FlightPath and installed Raoul Nardonne on rhythm guitar to beef up the sound, and the demo sold pretty well in Hedgehog records and bought in more gigs.

Higher Breed appeared around this time, we invited them to support us at a gig we did in Little Downham with their heavily U2 influenced sound, and their progress is outlined elsewhere on this site, its funny to note that Ian Turner took over bass duties for them in 1991 after coming out of the army, so those three little mod boys had come full circle.

By now though I was coming to an end at 6th form, Liam had gone off to music college in London, after being ill for a while, and I was at tech College in Harlow studying journalism and working Saturdays so the rehearsal times and gigs dried up. We blew out on a gig in Colchester and another at the George Robey in London and by the time I went to Uni in Wales in 1991 I had left ThreeHead, without ever really telling anyone. Not before we had played in a field on the solstice weekend at a farm somewhere near Little Thetford for a drama teacher called Tony. We played last as the sun came up, it was a festival atmosphere and we played our last track to an accompaniment of triangles and bongos, probably as close as Ely ever got to Glasto.

I didn’t really stay in touch, but I think by then the end was in sight, gigs were drying up, the Burleigh Arms in Cambridge closed down and became a gay bar, and as far as I’m aware all the bands had pretty much split up by 1992. I think Ian Turner replaced me briefly in ThreeHead and they played a few more gigs, Color Factory had split up before I left, and Christian, my mascot, had vanished off the radar. Music was moving away from real instruments and pubs were turning into disco bars or something equally frightful.

I’ve still got the bass though, so if Ogg’s reading this… drop me a line…. we could start a psychedelic-fen-rock revival……

Ely Folk Festival 2006 Review – A Look Back Scroll to top