The Radio One Experience With Crossland

You are here: Home1 / Ely Music2 / The Radio One Experience With Crossland

The Radio One Experience With Crossland – By Karl Bedingfield (first published in 2005). 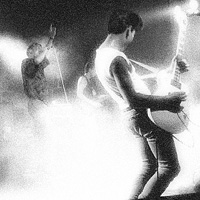 In 1990, Crossland, were one of Ely’s most popular bands with a loyal local following and they were starting to attract attention nationally.

March 31st, 1991 sees the band in the final of the Radio One sponsored national band competition, ‘Hit The Write Note’, as a result of that Crossland were invited to join Bruno Brookes and Liz Kershaw on the Radio One Roadshow for one week in July.

One year later the band split and their final album remains unreleased, but thats another story.

Published for the first time is former vocalist, Chris Williams experiences of that exceptional week in July.

The Crossland Radio One Roadshow Diaries

It was Liz Kershaw’s idea. She suggested it and who were we to argue? And by the end of July, we needed a holiday anyway – the English south coast seemed as good as… well good enough for us and imagine playing to all those people we thought, in the sun, by the sea – everyday?! We didn’t think of the effect fried breakfasts and dinners everyday for a week would have on us, though. Or the stretched nylon bedsheets which doubled up as curtains in some of the B&Bs. Nor did we think of the unrelenting tide of day-glow leisurewear that relentlessly battered the subtle colours of the sea into submission almost everywhere you looked. But that’s all part and parcel of life at the English seaside resort, isn’t it? What we came down for was to see how this roadshow worked. We learnt a few things along the way too… 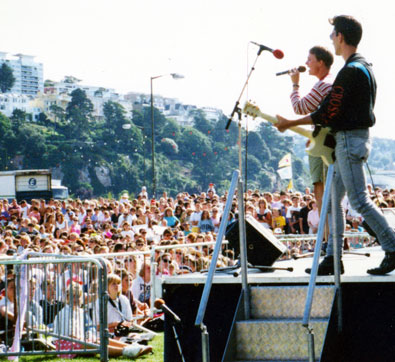 Setting: The inside of a transit.

After a five-hour journey in the back of a van loaded with equipment, spar underwear, and eight sweaty bodies, we arrived on the Isle Of White and booked into a place called ‘Marine Villa’ (well it was either that or ‘Sunny Meadows’ – take your pick)

Later on we spent a couple of hours searching for the hotel where all the Radio One bigwigs were staying, to find out where they wanted us to do it the following day. We bumped into Malcolm Brown, the show’s producer in the hotel bar, and filled us in on the details as we sat around just nodding politely in agreement with almost everything he muttered in his thick Mersey accent: ‘Mmmm… now you’ve got your reel-to-reel tapes, lads?’ (Nods all around) ‘So it’s just yer vocal that is going out live?’ (Vigorous nods!) Mmmm… Now you’re to be there by, mmm, approximately Nine O’ clock etc etc’. More nodding, more handshakes and out we went into the Sandown nightlife, which were a few beers and an Indian!

Lesson No. 1: Don’t go to Sandown for entertainment unless you’re there to see Rolf Harris.

Setting: A grass common by the seafront, Sandown, Isle Of White.

Perched on top of a Roadshow mobile, with the wind rushing up your shorts, the experience of miming to our songs was rather isolating at 10:30 the following morning. Looking down and around us were a sea of babies, children, mums, dads, uncles and auntie’s, gazing up at us squinting in the sun. What the hell must they be thinking? I mean we’re not exactly the usual ‘top pop celebs’ this sort of audience would expect to see. Mild paranoia set in as I looked around to see the rest of the band miming hopelessly out of time as the wind took what could hear of ourselves straight across the English Channel.

What the hell must they be thinking? I mean we’re not exactly the usual ‘top pop celebs’

My fears were unfounded when we climbed down off the trucks with the aid of an electrically motorised elevator, there were comments from an enthused young budding muso journalist: ‘Yeah, well I’ve seen Chapterhouse and you’re better than them’ And a girl said: ‘Yeah me and me friend really liked you in Weymouth and… I’d love to ‘ave one of your T-shirts but I haven’t got any money on me!?’ This was encouraging, obviously we hadn’t totally blown it. And it’s not everyone who gets to share a mob of unruly autograph hunters with Level 42, now is it?!

Lesson No. 2: Everyone at a Roadshow loves a freebie.

Setting: The inside of the van again with a view of traffic chaos in Bournemouth.

Tempers begin to fray, but in the capable hands of Andy, our driver, we move swiftly out ‘through the corners and the hills’ into… Weymouth. Something called ‘festival week’ brings the world, his wife and children into this part of the world at this time of the year. Why? We never found found out, but luckily for us we had already booked our B&B’s, giving us plenty of time to visit Weymouth’s very own Mrs Miggin’s pie shop. Twice we visited their delightful premises and twice we were defeated by the awesome volume of thick crusts, stodgy fillings and mouth sticking milkshakes. Make no mistake, Weymouth and it’s peculiar brand of ‘pie shops’ are big business.

Lesson 3: Book early! And never bite off more than you can chew.

Setting: On the beach, on the ‘mainstage’ of the Roadshow, and ‘on air’ in more ways than one.

Looking at more people in one place than I ever would have believed possible. Wow! By now we’d done the Roadshow apprenticeship and found ourselves using all the old ropes that were predictable but nonetheless extremely effective on stage. If Smiley Miley could use the same tricks everyday, and Bruno Brookes could repeat his terrible jokes from town to town, then why couldn’t we get the crowd to singalong to our songs, scream when we jumped off the stage towards them, and even let them win one of our T-shirts?! Well, we did.

Later on we made the routine the routine rounds of the nightlife but we were rejected from one night-club because of our unsuitable attire. ‘Even if we’re with the Radio One Roadshow?’ bassman Psyche enquired. They let him in.

Lesson No. 4: If someone’s got a good idea use it.
Lesson No. 4b: If someone doesn’t like the way you look, tell them you’re with the Roadshow!

After hours of running up and down garden paths looking for a place to stay, we found a landlady called Maureen who befriended Sean (our road crew!) and told us it was very exciting to have a ‘rock band’ staying with her, adding that we could do anything we wanted to as long as we closed our doors. So we gave our underwear a good airing and smoked some cigarettes we’d brought with us. Planned to go swimming but there was too much seaweed about. We played football on the beach but didn’t header the ball as it was a bit too sandy.

Lesson 5: Nothing ventured nothing gained.

Setting: On a park near the beach in Torquay, where thousands of people were busy congregating, again.

Earlier on in the week Malcolm Brown had told us that this week should be just good fun and that everything should run just as smoothly as possible. Well he was right on both counts. The organisation was slick and the Roadshow roadcrew were always willing to help anyone: whether it was swapping the order of our songs around on the reel-to-reel or carrying somebody’s lost baby for half an hour, they did it.

Even the infernal pre-recorded intro – ‘and nowww, live froomm Torquay, Bruno aaandd Lizzz!’ – which they played five times every morning as a warm up – became totally acceptable because it worked so well. And it was Smiley Miley who turned out to be the real winner of the Roadshow, because thousands of people would queue to buy his damn Radio One T-shirts. Even Bruno Brookes and Liz Kershaw’s theatre world worked because they were acting like a 20th century Punch and Judy, a well rehearsed comical formula.

Lesson No. 6 Look for the ridiculous in everything and you will find it.

Setting: The interior of a van which we knew pretty well y now, followed by a ‘homecoming’ gig at the blessed Alma Brewery in Cambridge.

Where were all the screaming girls? The prams? And the celebrities? Not here at any rate.

As Level 42’s Mark King said when he took one look inside our van ‘Ah, those were the days!’

And whilst that mean mother of a Roadshow went onward, sucking up every young person it came across along the length and breadth of Britain we felt like we were – a small cog in a well-oiled and thoroughly successful bit of business machinery, and if they used us then we certainly used them for all we could. But in the midst of it all, everybody really did have a ‘goodtime’, because as Level 42’s Mark King said when he took one look inside our van ‘Ah, those were the days!’

5 Advantages of Buying a Home in Ely Scroll to top