Once again the Ely Online Folk Boy Three (plus new recruit, Holly), got our yearly dose of Folk Music at the 20th Ely Folk Weekend. I was there to provide the words, Karl the pictures, Holly the spangly hats and Lee the musician’s eye view of the proceedings.

When I booked our tickets in February and sat daydreaming in the office about drinking beer in the sun and listening to Folk music I didn’t envisage that I’d be wearing a coat, shaking with cold, on the first night of the Folk Weekend. Ignoring the dodgy weather, I got my first Dragon Slayer of the evening and consulted my heavily researched concert list. 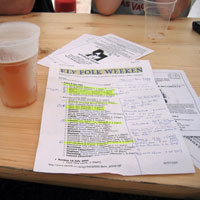 I’d done my homework in the fortnight leading up to the festival, listening to downloads on the bands websites and highlighted the acts I wanted to watch. As usual the Ely Online brief was to capture the overall feel of the weekend.

This, the 20th Ely Folk Weekend, was staged for the fifth year at the Ely Outdoor Centre – better known to myself as the Unwin Ground, home of Ely City Football Club. It’s a strange sensation, sitting in the sun drinking beer (which we eventually did) and listening to Folk music only 50 yards away from where I stand freezing my arse off in January watching Ely City play Felixstowe in the Eastern Counties League. 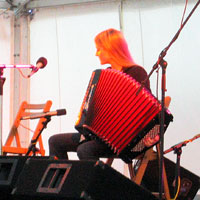 First up on Friday evening was Harriett Bartlett. Harriett is building up a reputation on the folk circuit playing Celtic music on the piano accordion. She’s played at many venues, including the Sidmouth and Fylde Festivals and she recorded a session for Andy Kershaw’s BBC Radio 3 show in October 2004. After Harriett’s captivating set it was Last Night’s Fun. I was converted into a “Funster” after seeing them at last year’s festival and they impressed me again with “Doxford Hall”, “The Innkeeper’s Daughter” and the rest. As Chris from the band says, “Play That Chunky Music Pipe Boy!” They are passionate, funny and make the marquee wobble. I love ’em.

With the Dragon Slayer gradually taking over, my carefully annotated list was already getting ignored (and damp) and we completely missed Steve Tilston’s set by drinking more beer and getting seriously involved with an excellent Beef Chilli from the wondrous “Chez Nous” food wagon. I want them to park on my lawn so I can just wander into the garden and order food when I feel like it. It was also an opportunity for Holly and myself to try out some of the folky hats that never quite seem to fit.

Last up on Friday evening were The Doonan Family Band and I had to explain to an increasingly confused Lee that they weren’t The Dooleys or The Nolans. They played a stormer of a set that included a few problems with the PA. However, the show went on and they walked among the audience playing acoustically – what sooper troupers. From a complete folk novice a few years ago I instantly recognised “The Moving On Song” when I heard it as I’d heard Last Night’s Fun play it before. Hmm – this is getting worrying. Better make sure I shave every morning and check that I’m not wearing a day-glo waistcoat and stripey trousers.

There’s a CD in a case on a shelf on a wall in my house that I bought at the weekend by Boo Hewerdine. Among the many highlights of the Folk Weekend was Boo belting out “Patience of Angels” to a full tent on Saturday evening. We’re extremely lucky to have Boo (now an Ely resident) on our doorsteps. It’s a bit like…er..(searches for comparison) – Michael Owen turning up and offering to play for your local football team. However, before Boo hit the stage in the evening there was some coffee drinking and head clearing to do. 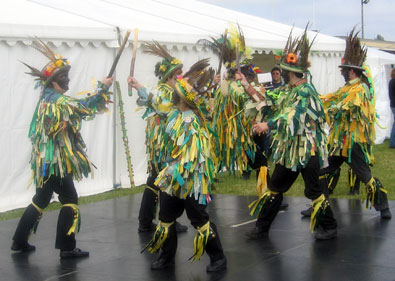 By mid afternoon the sun was out and it was time for more music. Reluctantly leaving the flaming ball of gas outside we saw Uiscedwr who played a poppy folk with fiddle player Anna Esslemont bravely playing on with a bandaged finger. Newly permanent member Kevin Dempsey ripped up a storm with his guitar playing and they provided the perfect start to the afternoon concert.

Next up was Steve Tilston who we’d missed on Friday night. That’s the great thing about the festival – you always end up seeing all the acts at some point. Steve was joined on stage for the last four songs by Guy Fletcher from Little Johnny England. Yet another thing I like about Folk: Steve saw Guy in the audience and just shouted “Have you got your fiddle?” Five minutes later they were a duo. There was some spontaneous dog barking during Steve’s set. Why do people take dogs to a music festival? It’s like taking a fish to a football match. Not needed. Switch your dogs off before the shows start! (note- this is a recycled gag – nothing is wasted on Ely On Line) 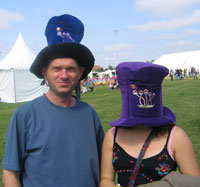 The evening concert began with Elbow Jane who impressed with their tight playing and the excellent vocals of Rich Woods and just as I was thinking to myself that they sounded like Crowded House they went and did “Better Be Home Soon”. Next up was Wild Clover. We caught a few songs before the Chez Nous food wagon beckoned and pork, mushroom sauce ‘n noodles were swiftly dispatched in readiness for my personal favourite of the weekend, Boo Hewerdine.

I first saw Boo almost 20 years ago when he was in The Bible. This was in the days when the Corn Exchange was shut and the Guildhall was the rock venue for Cambridge. Last seen in Ely at the Folk Club last year, Boo was excellent. His rockin’ “59 Yards” got people up to dance in his “Win a Boo CD” competition. My style of writing is unsuited to describing how I feel about Boo’s songs so I’ll leave it to Nick Hornby. This quote is from Boo’s site: “It aches, and that ache is probably pop music’s rarest, most valuable commodity: it takes real nerve to prize regret over rage, and tenderness over threat”. That’ll do for me.

Saturday night’s headliners The Acoustic Strawbs come fresh from receiving a lifetime achievement award, celebrating thirty years in rock music. I knew nothing of them outside of the fact that a young Rick Wakeman was in the band many moons ago. When Dave Cousins started to belt out the first song, his voice sounding like weapons grade syrup, I thought “what the hell is this?” And then – the catchy third song started and I got it. Right there I got it. They were fabulous. Playing songs from their last CD, “Deja Fou” and finishing with a barnstorming rendition of old hit “Lay Down” it was a fine finish to the second day of the Weekend.

Lastly – a lazy Sunday afternoon. We joined the majority of the festival goers by soaking up the rays and listening to dance band 3-Point Turn trying to convert a group of tangle-footed men into suitable partners for their fleet-footed partners. Some shy-looking men skirted the edge of the tent daring themselves to give it a try. 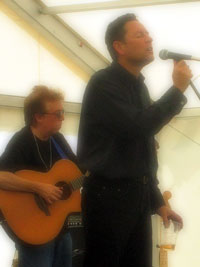 The caller (Arthur Marshall?) eventually got a balanced dance-floor by screaming, “Men! We need more men!” I stayed, resolutely, on my back, listening to the music and sipping a beer. It was Karl’s turn to visit the Wagon of Earthly delights and he returned, weighed down, with the finest pork roll I’ve ever seen.

Sunday’s highlight: Colvin Quarmby. The programme promised us a mixture of Buddy Holly, Hank Williams, Tommy Steele and Morrissey and, amazingly, that’s what we got. Front man Gerry Colvin managed to shoe-horn a Sacha Distel name-check into a song, sang a tale of a couple who’d been married for 72 years and even slipped in a song about Willie Nelson. Gerry says that one of his ambitions is to write a song with the word testicle in it. That should be worth waiting for. My favourites were the singalong “One More Week” from their latest CD, “A Short Walk To The Red Lion” and an oldie, “Watching Feathers Fall”. After their storming set that was the end of the folk weekend for us. We were all folk’d out.

For the fifth year I’d gone into the weekend with a list of names and no real expectations of what the music was going to be like. And again, I’ve left the site on a Sunday with tunes going through my head and a list of bands I’ll check out again. See you next year!

Video: Some chatter from the Folk Boy 3 and an excerpt from Saturdays procession through Ely High Street: Click to download video.