A Nation of Sissies – Historic Article by Anne DeBondt

You are here: Home1 / Contributors2 / A Nation of Sissies – Historic Article by Anne DeBondt
By Anne DeBondt – (Please note that this article was written and first published in 2005). 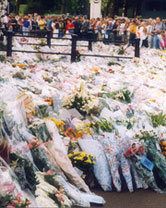 We are fast becoming a nation of sissies! It isn’t enough that bad things happen, we now have to celebrate, commemorate and venerate every last detail of any bad thing no matter how big or small that bad thing was – just so long as the media can film it!

Where is the courage and fortitude folk used to have in the face of heartbreak or misfortune? Where is the stiff upper lip shown by previous generations through comparable pains?

Strangers who feel compelled to lay flowers at the site of someone’s death – a someone they never knew – are filling a void in their lives that has nothing to do with the tragedy, the dead person or the media sensationalism.

We need to get a grip and get a hold of ourselves!

Our Tragedies Have Become Tragic

Another year practically over and we’ve endured more tragic events to observe in time to come. As it is we have no more recovered from the Princess Diana memorial season and almost immediately we were headlong into the heart wrenching remembrance services for the 9/11 victims and their families.

Just for the record, I have never understood the near hysterical mourning this country dissolved into when the ex HRH, and by all accounts an exile from all good society, was killed in a road accident. Not that I ever wished her harm nor did I feel that she deserved to die for her lack of good judgement, it’s just that the woman was an unexploded bomb – tabloid fodder – glossy magazine gold! Our beloved Aunty, she was not!

Anyway, preceding the aforementioned events, in turn, next year we will no doubt add to the roll of catastrophes to observe, the Asian Tsunami in December, the London bombing in July, Hurricane Katrina in August and god forbid any events yet to occur in the remaining few months of this year.

And as well as merely remembering, we’re now expected to stop for one, two or three minute silences whenever the organisation running the sympathy-show dictates. We are also expected to demonstrate our original grief and pain and display it in abundance for the misery-hungry press as the anniversary roles round.

I do not mean the likes of Holocaust Remembrance Day or the celebration of VE day. It is an education to recall what happened then and why. Nor am I grumbling about individual grief – to lose a loved one, your livelihood or your home in any circumstance is an unthinkable misfortune. You are entitled to mourn privately and in your own time.

I am talking of tragic events that have affected comparatively few, yet somehow escalate to universal magnitude.

We’re quickly becoming a nation of the professionally depressed. We love to lay our store-bought flowers in tribute to total strangers, mourn a celebrity’s passing as though he or she was a valued family member, and mark the spot where someone died as hallowed ground.

And despite that we haven’t suffered the tragedy first hand; we convince ourselves that we’re entitled to express the same level of grief as the affected.

No one just dies any more. No one simply suffers a disaster. We now need counselling and monetary recompense (and lots of it) to fill the gap. We feel justified in selling our story despite that the tabloids have already beaten every sordid detail to death (and invented a few where necessary). We require a visit from a dignitary, celebrity or politician to soothe our grief. Although just what good a movie star or a politician can do for the recently bereaved or the newly homeless is beyond me! Maybe people just get a kick out of seeing a faint-hearted actor amongst genuine rubble for a change.

Hold your row, stop making a fuss and get on with it

As my husband’s grandmother used to say in such circumstances, “Hold your row, stop making a fuss and get on with it” And that was her attitude even after suffering through W.W.II, raising three children during rationing and surviving two husbands. No flowers laid by strangers, no plaque to commemorate the spot she passed and no honourable silence on the anniversary of her death. Yet we managed.