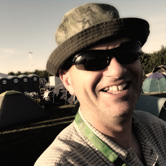 Friday, July 9: From humble beginnings in 1985 when Ely first hosted its “Folk Day” (ticket price £4.50), through years of the “Folk Weekend” which was held in various venues throughout the City, to the Pocket Park Years the festival always retained a unique essence. The move to the Outdoor Centre in 2000 and the inclusion of more concerts, dances and workshops has not diminished that certain something that Ely has. As my Uncle Google says, “Licentia Puteus Unus”.

And so, to 2010, the Silver Anniversary of the Festival. With my Sun Dance instructions safely tucked away, the temperature at 35 degrees on the car gauge and 42 under my armpits, I set off for the festival. 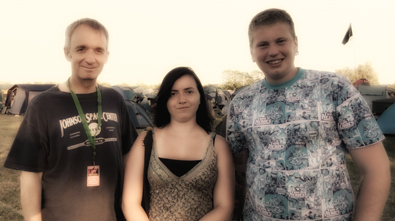 Ely Online assembled at the site for our traditional Friday evening photo with the Ship of the Fens as a backdrop and the remit to capture that special quality that keeps regulars coming back year after year. 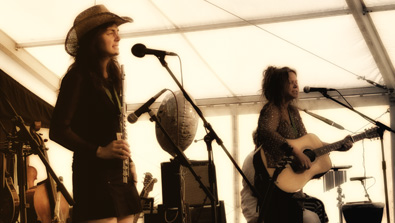 The Floozies were the first act I caught on the main stage and are so damn cool that they are like aural fans, their jazzy folk riffs bringing the temperature down with each blast from Paula Welham’s sax. Their gusts of harmony and virtuoso musicianship were a fine way to start the weekend. 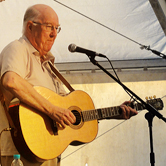 Harvey Andrews was up next and the 67 year old singer song-writer enchanted the audience with his songs. With 43 years of his professional career chalked up he was proud to declare that he’s 2 years younger than Sir Cliff Richard but 2 years older that Keith Richards. The veteran was around the site on Saturday as well and he looked very chuffed after turning up for a sound-check and being sent away by the sound man as it was “just the same as Friday”. Very handy just being one man, a guitar and a head full of songs.

I’ve seen Colvin Quarmy 2 or 3 times before but they still have the ability to surprise. The captivating “Broken Man” with its five part harmony is a tribute to NHS drugs that work and Gerry Colvin’s lyrics are a joy to listen to in these days when song writers seem scared to say what they mean.

The beer tent was doing brisk business and when the Dragon Slayer ran out my distraught daughter had to accept an alternative, Eelcatcher, which brought a grimace to her face. Luckily, there were many more barrels to hand and we enjoyed at various times; Reel Ale, Anniversary Ale, Dragonslayer and Shefford Bitter. Many thanks must go to the overworked volunteers who battled away all weekend to keep the beers cool and the customers satisfied. 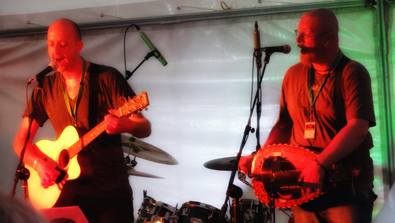 The opening nights headliners The Demon Barber Roadshow were, as the youth say, Awesome. Mixing traditional folk tunes and using clog-dancers and a beat-boxer (I think they’re called) as well as molly dancing themselves they earned a standing ovation.

At one point they were doing Pete Townsend style leg splits which I’ve never seen a Morris Man perform. It was like The Who doing Riverdance. No wonder they won the Best Live Act Award at the BBC Radio 2 Folk Awards last year. I don’t know what any of the songs were called apart from the rebel yelling “Captain Ward” but they were excellent and went down a storm.

Saturday: Saturday began, as per recent tradition, with a ginormous cooked breakfast at Ely’s premier Fryuperie “Street Cafe”, before getting into position to watch the Morris dance procession.

Is it all bells and whistles? Nah! we were treated to a banging, shouting and whooping parade of a smorgasbord of English dance sides including long sword, Cotswold, north- west clog and Suffolk flip-flop. That slapping sound is rather irritating. I hope they won’t be asked back. 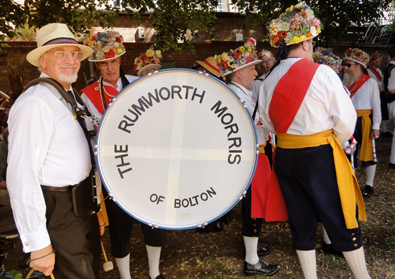 Back on the site later, my own thoughts were echoed when I heard a camper sigh, incline his head towards an armpit and mutter, “Hmm…time for some deodorant”. It was about 32 degrees at this point.

To my shame I’d missed Les Barker on his previous visits to Ely so I was determined to catch his set and I’m glad I did. Although obviously old favourites with the packed marquee (cos they chanted most of the tag lines) I sat and giggled my way through “Occasional Table”, “Deja Vu”, “Mange Tout” and the rest of Les’s gloriously surreal poems.

Next up, Lau, the band I had looked forward to with the most anticipation. I had “discovered” the band by a tortuous route about 3 years ago in a way most music lovers will recognise. Whilst flicking through the folk cds in Ely Library I picked up Kris Drevers “Blackwater” and noticed that he’d covered “Harvest Gypsies”, written by our very own Boo Hewerdine. I took it out, loved it and googled Kris to find Lau. That led me to their website and I clicked on the audio link for the frenetic “Hinba”. Result? Me continuously playing the song in the office for the next 4 days. I got some strange looks from colleagues, I can tell you, sitting there with my headphones on playing air accordion.

Lau didn’t let me down. Corking renditions of “Winter Moon”, “The Burran” et al met with raucous applause from a packed Marquee. I was slightly disappointed that by the end of the set they hadn’t played my favourite tune. So, when they took a breather before starting the encore I was nonplussed when they announced they were going to treat us to a song called “Hitler”! Hitler! Who the hell would write a folk song about Hitler? I misheard – yep, it was Hinba, in all its manic glory. As the young people say, LOL and LMAO. 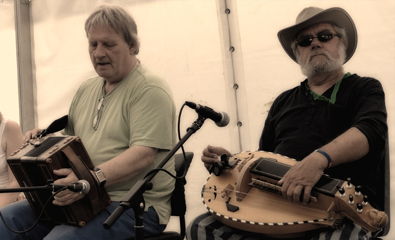 Whilst I was working up a sweat just watching Martin Green manhandle his accordion, Ely On Line’s chief lensman, Karl, was at the French dance workshop given by Bof! I had planned to join him but unfortunately I’d left my dancing trousers at home.

I’m writing this on a normal Sunday morning, sitting in my boxers, mug of tea to hand and typing the words, “death”, “cake” and “burial” into Google. I’m doing some research into a tragic story I read about years ago and I’m trying to find the details. I did write it all down in a diary but it’s faster to use the interweb than sit and read through 25 years of WH Smith diaries to find a paragraph of writing. And, I found this little nugget of information “Until 1823 suicides were buried under the public highway, usually at a crossroads, with a stake driven through the heart. Hmm – I feel a song coming on. 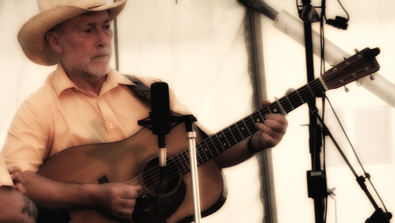 Why do I relate this gloomy tale? Because it’s only at a folk (and probably Goth) festival that you’ll happily stand there as the band say, “Here’s another song about death”. Yup, The New Essex Bluegrass Band played a fantastic set of snappy tales of murder and mayhem from the Deep South. With an “Elvis” style microphone to the fore they took turns to step up for their solos and received an ovation from an enthusiastic Marquee 2 . Brilliant.

As the refreshing evening breeze finally began to cool down the site the Ely online team promenaded between marquees 1 and 2 via the beer tent, taking in snippets of Chris & Kelli While, Chris Sherburn & Denny Bartley and the fantastic Wizz Jones. At 71, Wizz can still make his guitar weep and he almost had me blubbing with “Burma Star”, a song about his dad coming home from the war.

The evening was rounded off by the evergreen Oysterband. They pounded their way through an energetic set of crowd pleasers defying their 30 years experience and with the sides of the marquee down and people spread almost half way across the site to listen, it was an apt way to conclude the Saturday night of the 25th Ely Festival.

Sunday: Sunday began with Dogan Mehmet and some exquisite fiddle playing and the percussionist apparently playing bongos on an upturned electric flower-pot. They created an alluring anglo-turkish vibe and I particularly enjoyed the sing along “Dillirga” with more “La La’s” in the chorus than an Andy Williams song. 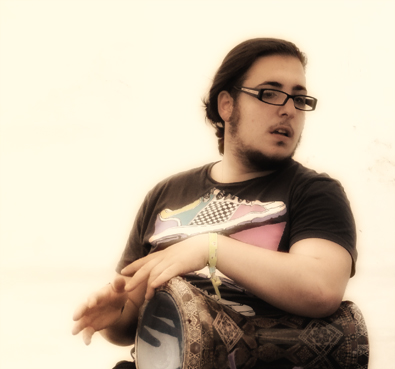 Tyde were up next and I can see why they were finalists in the Radio 2 Young Folk Awards last year. Their set was awash with hooky melodies and I’m looking forward to catching them again on the Thursday evening of the Cambridge Folk Festival.

As the sun continued to shine, the New Essex Bluegrass band were back, this time on the main stage and they played a completely different set including the tear-stained declaration of everlasting love, “All I Ever Loved Was You”. So – probably another song about death.

We decided to make a detour to a “meet me” with Wizz Jones and he proceeded to give a fascinating insight into how he developed his style over the years, learning (and cribbing) from the best – mainly Big Bill Broonzy. Wizz has a witty self-deprecating sense of humour and managed to teach some old dogs some new tricks at the same time.

Now – a dilemma. The Sunday of the festival coincided with the World Cup Final. My wallchart was up to date and I’d enjoyed a month of the greatest game on earth (apart from Kerplunk) and I really did want to watch it. C’mon – Holland v Spain. What have I done before? In 1986 I passed over the opportunity to watch Madness on the Main Stage at Glastonbury in favour of watching England play Argentina in the Quarter Final. The “Hand of God” was watched on a 2″ portable tv with 6 lads crammed into a 2 man tent. In 2006 I missed I missed Zidane’s chest butt whilst enjoying Zambula at Ely. So – “ what to do?

I’d already decided that this would be my last review of the EFF (my 10th) so I’ll be hanging up my stubby pencil and Oxfam diary and enjoying the festival in future as a lover of folk. No more jokes about beards and spangly waistcoats from me.

During the weekend I was able to catch up with Kim Mahler Garton, the Tai Chi instructor. I asked her if she’d be able to teach me how to do the splits. “Well…”, she replied hesitantly, “…it isn’t really part of my routine but I might. How flexible are you?” she asked. I thought about it and replied, “I can’t do Tuesdays”.

The Bounty Hounds live at the festival.

The Demon Barber Roadshow live at the festival.

Les Barker live at the festival.

Bof live at the festival.

The New Essex Bluegrass Band at the festival.