You are here: Home1 / What's On2 / A celebration of classical music in Ely Cathedral: Saturday July 10th,... 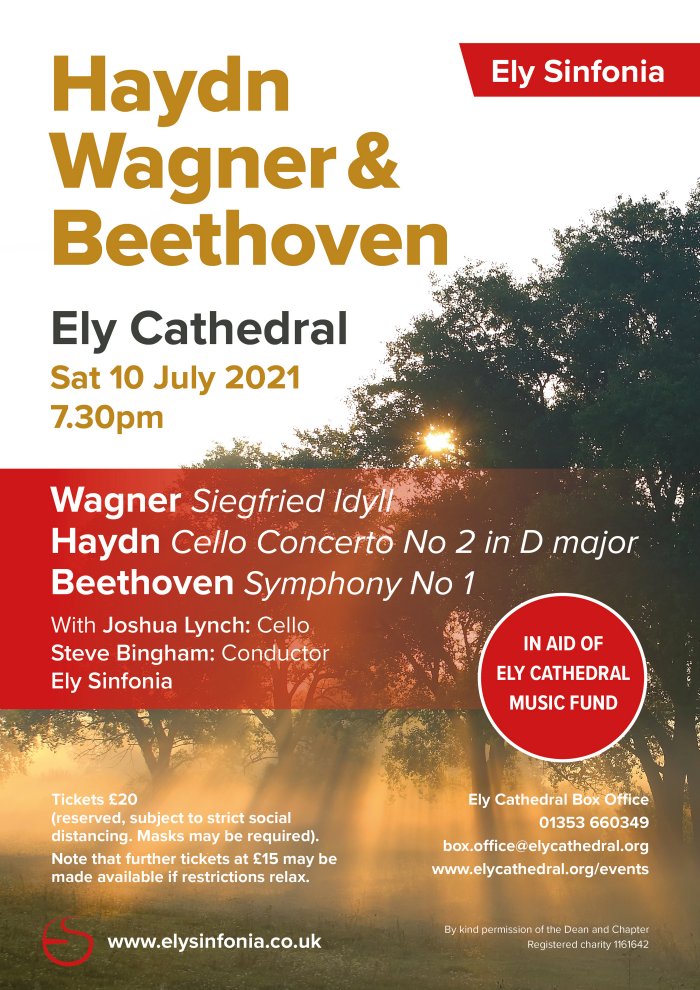 Ely Sinfonia is delighted to announce its return after nearly two years with one of the first post-lockdown concerts in Ely Cathedral.  On Saturday 10th July,  the orchestra will be joined by local cello super-star Joshua Lynch to play a concert of glorious classics by Wagner, Haydn and Beethoven.

The concert starts with the highly evocative Siegfried Idyll.  Ever the true romantic, Wagner composed this as a birthday gift to Cosima, his wife, following the birth of their son Siegfried.  It borrows the principal love theme and forest bird melody from his opera Siegfried.  Its delicious strains were first performed outside Cosima’s bedroom as she woke on her birthday, December 25th.

Rising British cello star, Joshua Lynch, then joins the orchestra to play Haydn’s witty, lyrical Cello Concerto No 2 in D major.  Cambridge-based Joshua is a prolific soloist, chamber musician and teacher.  He has performed in some of the UK’s most prestigious venues, such as Wigmore Hall and the Crucible, as well as the Leeds International Concert Series.  He is a past winner of the Maurice Ravel International Academy of Music award (Musiciens Entre Guerre et Paix).

Arguably the best work for cello and orchestra coming out of the nineteenth century, Haydn’s Cello Concerto in D major is something of an enigma.  There was some doubt over its authenticity for a while, but in fact, while apparently more relaxed and easy-going than the Cello Concerto in C major, it is technically much more difficult, demanding virtuoso playing from the soloist.  It is been recorded by some of the world’s best-known cello players, such as Mstislav Rostropovich, Jacqueline du Pré and Steven Isserlis.

Beethoven’s Symphony no 1 was an immediate success although somewhat unfairly criticised for its excessive use of wind instruments.  Since then it has justifiably been one of his most popular works: it is simply magnificent.

Social distancing rules mean that masks will be required and only 135 tickets will be available, at £20 each. They are available from Ely Cathedral Box Office (Tel 01353 660349), email box.office@elycathedral.org or online from https://www.elycathedral.org/events.

How to Avoid an Electrical DIY Disaster Scroll to top