You are here: Home1 / Contributors2 / Crossland: No Place Like Home

Ian Brown of the Stone Roses once remarked, “it’s not where you’re from (that matters) it’s where you at.” Well, I think he was half right. With Crossland it may have been more a case of, “You can take the band out of Ely. But you can’t take Ely out of the band”. We got close. But close to what? 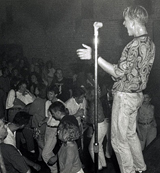 Crossland were already established in Ely by the time I arrived from Cambridge in early 1989. Their formative EP releases, “In Your Hands” and “In Shame”, had received a good local response so they were heading in the right direction even though they found themselves without a singer in the Spring of that year. They asked me to join and I thought, “Yeah, why not?”.

In early 1989 there were a number of guitar bands (REM, the Pixies, House of Love, Wonderstuff) kicking out against a mainstream of advancing rave culture, depressing Stock Aitken Waterman pop pap and a quagmire of unmentionable bland brand names doing the stadium circuits. Plus ça change! So, on joining Crossland I thought, “Great, I’ve found a bona fide guitar band!” At last there was hope for the local music scene!

Already a veteran of the Cambridge scene at 22 I was impressed and revitalised by two things I found in Ely:

1) A voracious appetite for “real” guitar music. I was delighted that Ely seemed to be living a few years in the past; a more innocent time when the songs of The Smiths, The Ramones, The Jam, The Undertones, The Hoodoo Gurus, early Elvis Costello and, yup, U2 still seemed to hold a real resonance for people. Not for Crossland the commercial cod-funk, string slapping bass players and other muso meanderings that had blighted the Cambridge music scene.
2) The loyalty and camaraderie that people showed each other. Even to the extent that they were almost suspicious of outsiders, i.e. me. But once you were in, boy, were you in. It was almost like entering a religious sect with the Minster Tavern as their “church”. And it wasn’t just the band members who stuck together but practically everyone else too: mates, drinking buddies, girlfriends, family, etc. Call them what you will but I’d never experienced such a great bond of friendship and affection before. 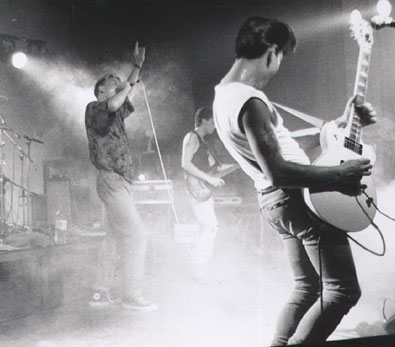 Never was this illustrated more eloquently than when a double decker coach load of Crossland fans and the band went up to Bradford on five separate occasions during 1990 to be involved in a Northern “Battle of The Bands” competition. (We reached the final eleven out of two hundred entries.) On one occasion when we were unloading the gear almost every passenger on the coach took one piece of equipment with them (a cymbal case here, a guitar there) until all 50+ pieces of equipment had been carried to the side of the stage. Talk about loyal support. Onlookers probably thought it was a 50-piece band arriving!

Another time was when we took part in another competition called “Hit The Write Note”, promoted by Radio One and held at The Marquee club in London (we came second out of over 4,500 entries). The noise the people from home made on those nights brought a lump to my throat! FANTASTIC! 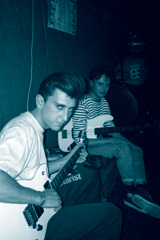 “all together we are Crossland!”

Pat Halls to a member of the Cambridgeshire constabulary who had stopped us to ask what our names were.

Lee Marshall – The anchor and the fulcrum of the band. And rock solid drummer.
Ritchie Taylor – Keyboards, singing and effervescence; a never-ending source of positive vibes.
Pat Hall – Guitar maestro who really held the key to our sound.
Psyche (aka Tony Watson) – Bass. The “mortar” that held all the bricks together.
Clint Davis – Our stalwart, mediator and manager. Had all the right rock ‘n roll reference points.
And me, Chris “Crossland”. The crooner. 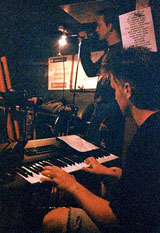 Ensconced in our cellar under the antiques shop opposite the Lamb Hotel (now Hunky Dory records) was a haven where we could hide from the rest of the world and hatch our ideas and plans to conquer –  well, Ely. In fact, if you go down there now – in a quiet moment – you can still smell the odours and hear the plangent sounds of Crossland reverberating in the walls. We wrote good songs that worked well live making us stronger than the sum of our parts. Songs like Party Piece, Any Pretty Body, Life Goes On et al. Really Big Nothing was the album at the time.

There wasn’t much of a “scene” as such in Ely during 89/90; that came later. The Color Factory, however, were good friends doing their own thing. On their night they were the business: a mean lean power-pop machine. Crossland and The Color Factory sometimes shared stages and crossed paths when they appeared on the same local record label, Freefall records, releasing a string of excellent 7″ vinyl singles. Walking like they should indeed!

However tenuous the connection between the bands, you could say one of the local scene highlights was the 1990 Cambridge Band Competition when This Replica (from Soham), The Color Factory and Crossland all ended up in the final six at the Corn Exchange with some top performances – especially from This Replica. They should have won on the night. 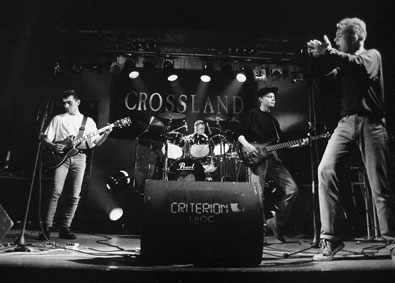 There was certainly a dearth of venues in Ely at the time. However, for Crossland it was always more a question of trying to break out of Ely; even if it meant traipsing over to the Bristol Fleece & Firkin on a Monday night. Glasgow for the weekend? We’d do it, no problem. Getting gigs at London venues such as the Camden Falcon and the Bull & Gate in Harlesden was also a priority. The Ely pubs just didn’t seem to want to put on live music so it was left to us to make our own entertainment. And we did – with some pretty impressive sell-out shows at the Centre E, the Maltings (twice) and even the Paradise Centre during the 90/91 period.

By early 91, with most of Crossland in their mid twenties, things had changed a bit. By now the Ely Standard was actually running a local Rock Scene column and a local music rag called “Sonic Cathedral” was throwing up some younger bands. We were probably deemed part of the “old guard” by the new arrivals. It felt like some of them were like little terriers, nibbling at our ankles. We weren’t in any mood to mix with them and I guess it was a sign that the scene was outgrowing itself already and forming subgenres. Either that or we really were past it! 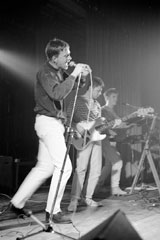 Crossland reached a “peak” of sorts in the summer of 1991 when, following our London exploits, we joined up with the Radio One road show on the south coast. No sleep ’til Torquay then! Rubbing shoulders with the likes of DJs Richard Skinner, Bruno Brookes, Liz Kershaw and acts such as The Barron Knights and Voice of The Beehive was unlike anything we’d done before. We recorded at Matrix Studios in London where previous clients The Smiths and Adam & The Ants had been before us. We had national as well as local airplay and had been interviewed on the nation’s “number one” station! Yeah, in a funny kind of way we did think we were touching the coat tails of celebrity.

But with the end of the summer came the end of the fun. The record deal never materialised and it was John Gammon (at the time manager of indie wannabes Kingmaker) who commented with admirable honesty and prescience: “If you don’t make it on the back of all that attention you never will.” It was a bitter pill to swallow. So we spat it out and dusted ourselves down for a re-launch on the back of what would have been our second album (Rinky Dink). But it wasn’t to be. Apart from a memorable headline gig at The Junction in the summer of 1992 to promote our new single “Seven Figure Silks”, internal differences had fatally nibbled at our “Crossland” core.

And in the end…

Maybe it was partly a case of us being too close to home to want to fly the nest. I think where you’re from will always have a bearing on where you’re at. Sorry Ian. So in the end I guess we were close – to Ely. But faraway from the magic, the madness and the broken promises of the music industry. And, anyway, there was other fish to fry. But that’s another story!

There are quite a few amateur videos and audio recordings of Crossland, most were recorded by Karl Bedingfield at local gigs and some audio recorded at Crossland’s practice room, ‘the cellar’.
Little Downham’s Mick and Lee Gillett also recorded 2 video demos for the songs ‘Party Piece’ and ‘Any Pretty Body’ at studios in Little Downham in 1991 for their video production company ‘The Demonstration Company’.

1. Crossland at the Radio One Roadshow: Ely Online discovered an old cassette tape of Crossland performing on the Radio One roadshow. It was taken from the mixing desk and gives a little insight into the pre-show before Radio One’s Bruno Brookes went on air with his roadshow.

2. Protect Me: This is a live version of ‘Protect Me’ that was recorded in their practice room, ‘The Cellar’ in Lynn Road, Ely.

4. Trick Of The Light: also from their unreleased ‘Rinky Dink CD’. 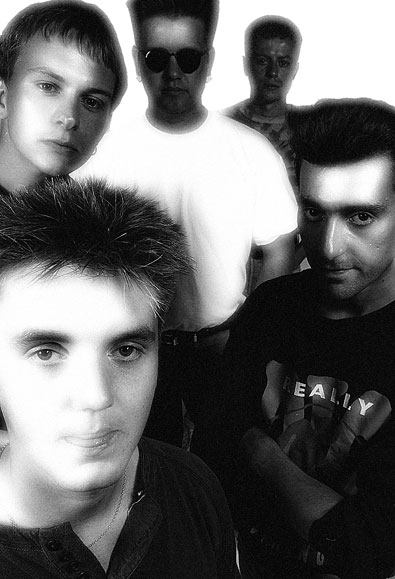 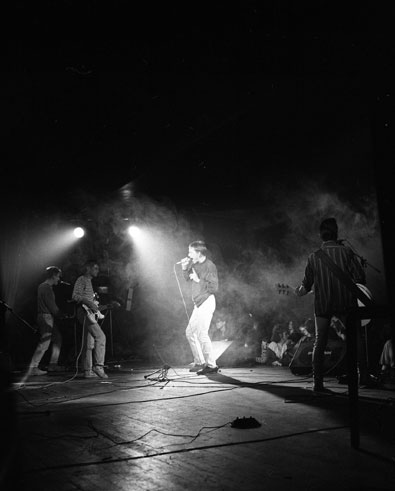 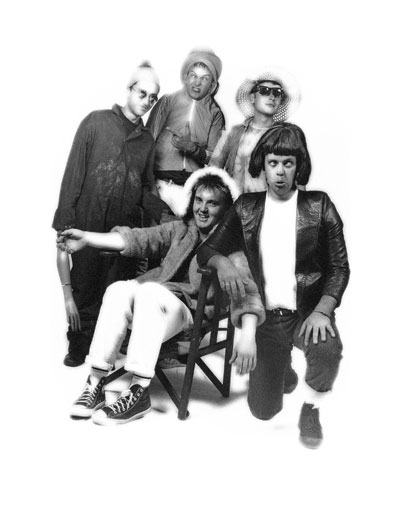 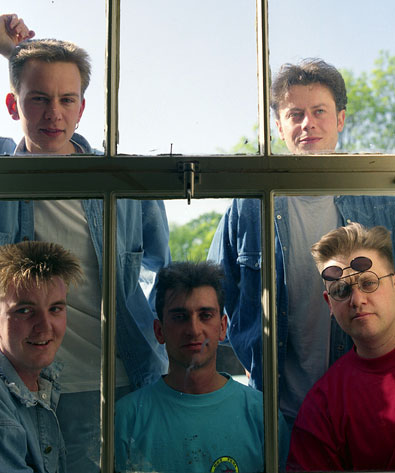 Historic Comments from when this article was first published in 2005:

Carl Jones
Carl Jones says:(Edit)
Sunday 13 Jun, 2010 at 10:25 am
I used to work with Pat Halls, anyone know where he is? – would like to have a few beers, any news would be very much appreciated. Thanx.

We used to follow the band all over, Radio 1 Roadshow in Devon, The Rio in Bradford, The Marquee Club, London. always great times! The bus journeys was always good entertainment…

Phil
Phil says:(Edit)
Wednesday 9 Sep, 2009 at 12:42 pm
Hi. I’ve been copying to PC some old cassette tapes including a number of BBC Radio 1 In Concerts. I’ve got 3 Crossland tracks from the broadcast June 91. The last track was introduced as a new one called ‘Any Pretty Body’ however I’m not sure what tracks 1 & 2 are titled. Happy to eMail if anyone is interested. Cheers.

I always wondered if the band really knew how much pleasure they gave to people – now I know they did.

Julie & Malvin
Julie & Malvin says:(Edit)
Monday 11 Feb, 2008 at 11:17 pm
Wowwwwwwwwwwwwww, Just how fantastic to read the above and remember, thank’s so much Karl and Crossland. Do you remember taking the photos of Kane for the CD cover I still have them all . Malvin & Julie

4 Ways to Fight Fatigue Is Bingo Older Than Cambridge University? Scroll to top