Fat VS the Fainthearted – Historic Article by Anne DeBondt

You are here: Home1 / Contributors2 / Fat VS the Fainthearted – Historic Article by Anne DeBondt

By Anne DeBondt – (Please note that this article was written and first published in 2005). 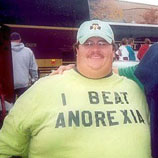 Why is being honest regarded as being antisocial? Why do I constantly have to defend my “frankness” when I am accosted by a large person, asked if I mind someone cutting in or tolerating bad service at a restaurant?

I don’t consider it rude to be straightforward yet I am sometimes regarded as an outcast because I will say something to a large person shoving their weight around or no to being asked if someone can cut in because they think their needs are more important than anyone else’s. And I’ll insist on being served a full cup of coffee if I am to be charged the full price!

And the gods should forbid I ever object to a fatty sitting in their car eating while the queue of motorists waiting for the petrol pump to become free grows ever longer!

I mean, wouldn’t the world be a much nicer place if we all spoke our minds without the fear of being branded as a social pariah?

You know, I’m a live and let live kinda person. For the most part I don’t mind what others do in the privacy of their own dwellings. Or, for that matter, what they do in public so long as it doesn’t involve me or interfere with mine. I go about life with a somewhat magnanimous approach.

Until I come across fat people that is!

Oh stop with the sharp intake of breath. I am not inclined to believe that overweight individuals who shovel large quantities of food into their gobs resulting in obesity deserve special treatment or sympathy – anymore than I am inclined to accept that heroine addicts deserve free needles or skinny people should be charged half price at the cinema!

As a relatively smaller person, I’d like to see what kind of compassion I’d be afforded should I push my way to the front of a queue and demand that I be served first because I am putting too much pressure on my feet by standing on them! I kid you not, this actually happened!. And locally! Needless to say I was not one of the fainthearted cowards who passively stood aside – and was repaid with caustic looks and much huffing and puffing as I went about my business – slowly!

Similarly I wonder how long I’d be tolerated if I sat in my car at the petrol pump while wolfing down recently purchased groceries ignoring the long line of motorists impatiently waiting for the pump to become free. Again, another local incident with a fat person!

Why is it that overweight people feel justified in inconveniencing everyone else? And should we smaller folk dare to object, we’re made to feel as though we have admonished a cancer patient for their inconvenient illness!

It’s rude. It’s offensive. It’s intolerable for undisciplined larger people to behave as though they are victims of their own food mismanagement and then presume that their faux-offence should carry as much weight as they do!

Not long ago all hell broke lose when a few international airlines (mostly on long-haul routes) began charging passengers double the price of a ticket if they exceeded a certain weight limit. And the uproar practically registered on the Richter scale.

Placards were carried, threats of boycotts were tossed about and fat people everywhere felt victimised and gathered together in unity (which might have been a factor in the Richter scale movement!) so as to voice their king-sized disapproval.

To this day I can not fathom what all the fuss was about. Why protest? If you take up two seats you should be charged for two. I applauded the airlines. I refuse to sit next to someone lopping over into my seat for 12 hours at a stretch. I also refuse to cede my right-of-way to a lane hog, make allowances for bratty kids in public or tolerate being served half a cup of coffee in a restaurant. And not once have I ever felt bad for my outspokenness. But then I am an old curmudgeon and proud of it.

Five Tips to Help You Qualify for Senior Jobs