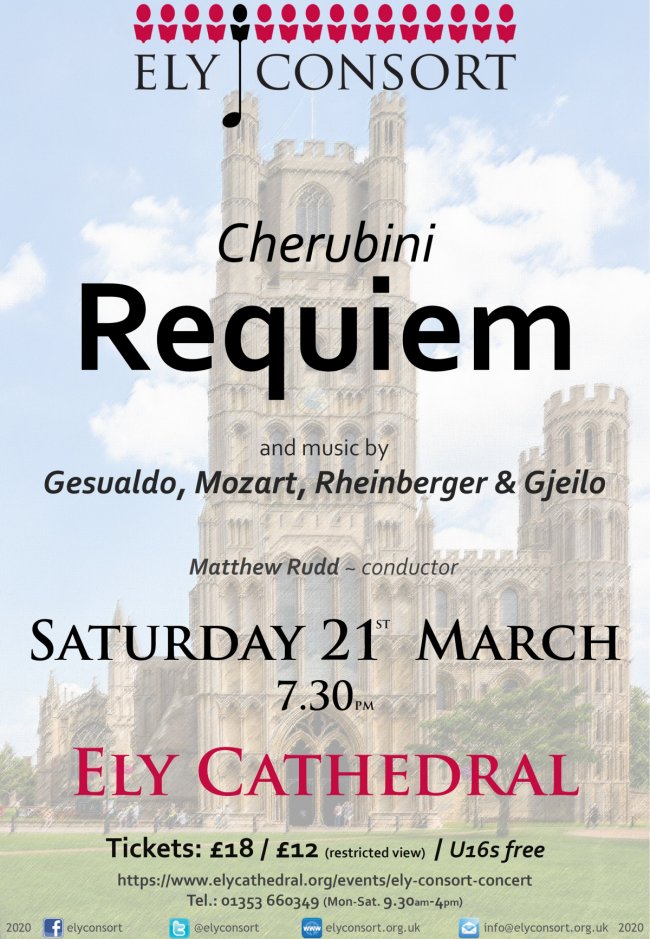 Cherubini’s magnificent Requiem in C minor will be the centrepiece of Ely Consort’s concert in Ely Cathedral on Saturday 21 March at 7.30 pm.

It was composed for the re-entombment of the French monarchs at the Basilica of Saint-Denis, Paris, in 1817. Cherubini was already much in demand as a composer in the capital cities of Europe, and this Requiem enhanced his reputation considerably.

Schumann called it ‘unequalled’, Brahms thought it ‘marvellous’, and Berlioz declared it ‘the greatest work of its author’. Beethoven admired the work so much he said it would be his example should he ever write a Requiem of his own; he did not, but Cherubini’s was performed at a Mass for Beethoven shortly after his funeral.

The piece is written entirely for choir without soloists, and the dramatic music vividly expresses the full range of emotions in the text. Other items in the concert include Mozart’s well-known Ave verum corpus and Lotti’s 8-part Crucifixus. Music by Gesualdo, Rheinberger and the contemporary Norwegian composer Ola Gjeilo completes the programme, which will be performed with the accompaniment of organ and string quartet.

A Gift Buying Guide for Those Romantic Occasions