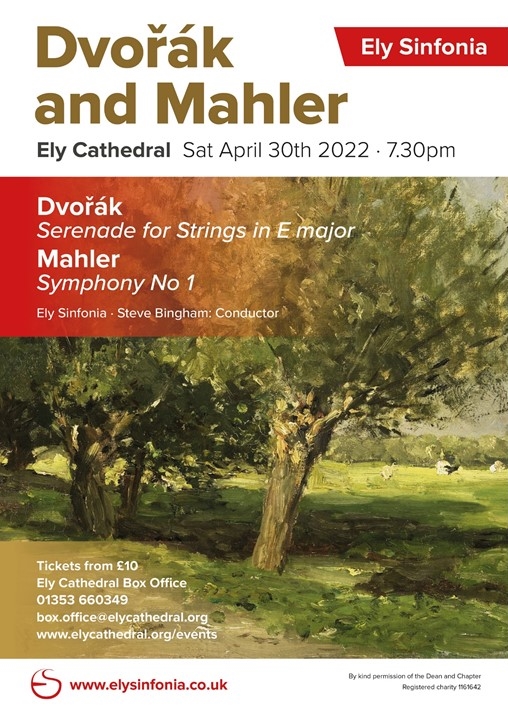 Ely Sinfonia returns to Ely Cathedral to perform Mahler’s Symphony No 1, arguably one of the greatest musical treats in the orchestral repertoire. Today it is sometimes referred to as “Titan”, but Mahler described it as a “symphonic poem in two parts”. In writing it, he built on the innovative work of composers such as Berlioz to produce a piece that would change the concept of the symphony for ever. It still uses the basic architectural form of earlier composers such as Mozart and Beethoven, but adds all the imagination and narrative of the symphonic poem. Inspired by German folk tales and poems by Mahler himself, it tells of the joy of living, love, abandonment and death.

But first, luxuriate in Dvořák’s famous Serenade for Strings, filled with lush melodies and rhythmic Czech folk music. This delightful piece blends radiant joy with wistful nostalgia, showing the true timbre of the different instruments as it weaves melodies and countermelodies into a sensuous drama of conversing voices.

Heard in the glorious surroundings of Ely Cathedral, this will be a concert to delight every music lover.

“Wow! What a concert…. Strongly led by conductor Steve Bingham, the orchestra revelled in its now powerful sound. The instrumentalists were confident, expressive and very much a part of the exhilarating atmosphere that pervaded the concert.” Rosemary Westwell, local music journalist blogger.

“This magnificent orchestra, under the baton of Steve Bingham, positively shone and the programme was spell-binding.” Rosemary Westwell, journalist and music blogger.