You are here: Home1 / Ely Music2 / LEADING EAST ANGLIAN ORCHESTRA TO PERFORM AS PART OF THE ELY ARTS FEST... 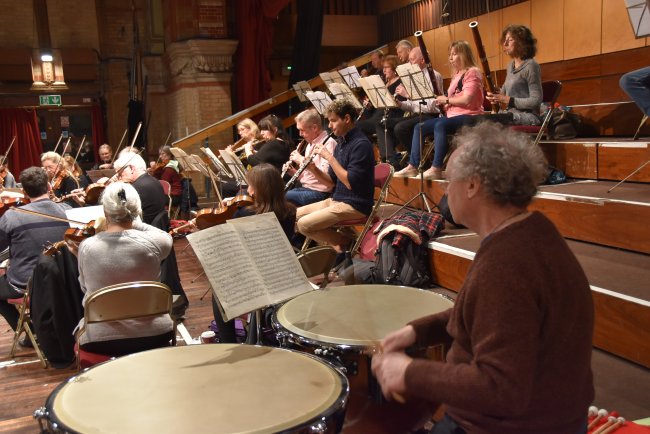 One of East Anglia’s leading professional orchestras, the Suffolk Philharmonic Orchestra, is to venture out of its own county for the first time to play a concert of some of the most loved music in the repertoire as part of the 2022 Ely Arts Festival.

Celebrating its tenth anniversary this year, Suffolk Philharmonic Orchestra (SPO) is made up of some of the country’s finest players, many living in Suffolk and the neighbouring counties. It has built a strong reputation in its own county for the high quality of its performances and is now beginning to take its work further afield, beginning with the Ely concert. It is particularly well known for its work with emerging young players: earlier this year it performed with BBC Young Musician finalist Maxim Calver, and in this landmark concert it will be joined by award-winning young violinist, Charlotte Saluste-Bridoux, who will be playing Mendelssohn’s Violin Concerto.

Taking place in Ely Cathedral on Saturday 25th June and sponsored by two local businesses, solicitors MCP-Law and wealth management company CamOuse, the all-Mendelssohn concert starts with the much-loved Hebrides Overture (also known as Fingal’s Cave), followed by the Violin Concerto. The concert will end with the Italian Symphony (no 4 in A major), which is full of the joys of Italian life.

The concert is one of the key events in this year’s Ely Arts Festival, which has been reborn after the pandemic and will be taking place from 17th June to 1st July. “Suffolk Philharmonic Orchestra is delighted to be taking part in the Festival in our first ever concert outside Suffolk,” says the orchestra’s conductor Leslie Olive. “We are especially looking forward to playing in the glorious surroundings of Ely Cathedral, presenting a really popular programme that we hope will be a popular event at the heart of the Ely Arts Festival.”

Composer Felix Mendelssohn wrote his Hebrides Overture (Fingal’s Cave) when he was barely 20 years old, following a trip to Scotland. He was particularly taken with the swell of the Atlantic and the sound of the waves crashing against the rocks. This piece, much loved by players and audiences alike, takes the listener on a journey through calm swells to something much more challenging and back again, finally disappearing across the horizon.

Mendelssohn’s romantic masterpiece, his Violin Concerto, came from the other end of his short life, premiering only two years before his death at the age of 38 in 1847. One of the foremost concertos of the romantic era, it has a central place in the violin repertoire and is considered an essential concerto for all aspiring concert violinists to learn. At this concert it will be played by Charlotte Saluste-Bridoux, who was a 2021 prize winner in both the inaugural Young Classical Artists Trust (London) and the Concert Artists Guild (New York) 2021 International Auditions.

The concert ends with another piece from Mendelssohn’s travels, the Italian Symphony (no 4), premiered when Mendelssohn was 24 years old and had recently completed a Grand Tour of Europe. It is filled with the swirling colours of Italian peasant life, from a sun-drenched opening into a solemn religious procession in Naples, and ending with a fiery Saltarello and Tarantella, the legendary frenzied dance in which the victim of a tarantula sting dances himself to death.

Tickets for the concert start at £21 and are available from Ely Cathedral Box Office, tel 01353 660349, email box.office@elycathedral.org or online from https://tickets.elycathedral.org

Suffolk Philharmonic Orchestra was founded by conductor Leslie Olive in 2012 to bring high quality concerts to the people of Suffolk. Since then it has established a strong reputation for the calibre of its music, drawing on a pool of musicians who have performed in professional orchestras all over the world. As well as playing in some of Suffolk’s most prestigious venues, the orchestra also performs small community concerts in venues across the county, right down to the smallest village. These include lunchtime concerts in village halls in collaboration with Suffolk Rural Coffee Caravan.

A strong element of Suffolk Philharmonic’s remit is working with children, giving them the chance to sit alongside professional musicians in joint rehearsals, playing music from baroque and classical to jazz and film scores, as well as playing the work of local young composers.

Marking its tenth anniversary season in 2022, Suffolk Philharmonic has been playing an extensive programme, with concerts in The Apex, the Theatre Royal and Ely and St Edmundsbury Cathedrals, as well as community and education events across the county. This includes The Lark’s Flight over Suffolk, an exciting new entertainment for actor and musicians celebrating the 150th anniversary of the birth of composer Ralph Vaughan Williams.

Suffolk Philharmonic is the brainchild of conductor Leslie Olive, who founded the Orchestra in 2011 and conducted its launch concert in St Edmundsbury Cathedral at the Bury Festival in May 2012. Leslie is a conductor, composer, choir trainer, a writer on music and above all a visionary for initiatives which put the power of music in the way of more and more people.

His previous creations in the community include the ambitious leisure-time choir, The English Arts Chorale, and the immense Reigate Summer Music Festival, as well as the boys’ choir of Colchester Royal Grammar School. He is the composer of the huge educational opera The Master of Ashmore, written for Kent teenagers to sing in 1978 and due for a concert-performance revival – probably in Suffolk in 2023.