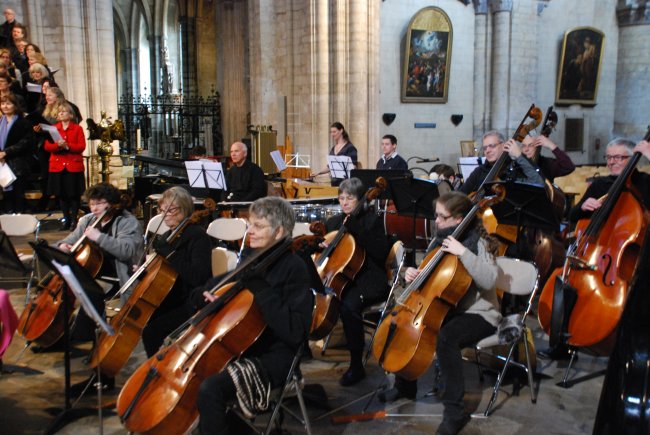 HOLST’S THE PLANETS SUITE: 100 years to the day

One hundred years to the day after its first performance, Gustav Holst’s magnificent Planets Suite will ring out in Ely Cathedral, on Saturday 29th September 2018, when Ely Sinfonia takes to the stage under the baton of its conductor Steve Bingham.   Right from the moment of its world première, conducted by Sir Adrian Boult in the Queen’s Hall, London, The Planets has been Holst’s most popular, influential, widely performed and frequently recorded of all his works, with Jupiter and Mars among some of the most recognised of all English music.

Also on the programme is Holst’s first major orchestral work, his Cotswolds Symphony, described by Classic fM’s Anne-Marie Minhall as “a superb joyful piece with hints of greatness to come.”

The concert starts, fittingly, with the world première of a piece by a modern, local composer. Phil Toms’ Great War Overture will paint a picture of life in the trenches that will echo down the past hundred years: fitting tribute in the wonderful surroundings of Ely Cathedral.

“We are very privileged to be playing one of the most loved of all British works on the precise day of its centenary,” says the orchestra’s conductor and artistic director, Steve Bingham. “From the moment of its first performance in the Queen’s Hall, London, on 29th September 1918, the British people took Holst’s The Planets to their hearts. Its melodies feature in music ranging from the scores of films such as Wallace and Grommit and The Lord of the Rings to the hymn “I Vow to Thee My Country”, played at both the wedding and the funeral of Diana, Princess of Wales, and the funeral of Baroness Thatcher, as well as many festivals of remembrance.”

“We are also thrilled, 100 years after the end of World War I, to be performing the world première of the Great War Overture by my great friend, local East Anglian composer Phil Toms. This is going to be a historical and memorable evening.”

Since its foundation in 1999, Ely Sinfonia has become one of the region’s best respected amateur orchestras, drawing players and audiences from across the area. It plays everything from mainstream to modern works, including special commissions, and frequently collaborate with other local groups. For example, in 2015 Ely Sinfonia hosted the extraordinary first performance of two new pieces, Island and Hereward in Ely Cathedral in 2015, with a choir of more than 100 local children and adults, whilst in July 2017, the orchestra combined forces with Ely Choral Society and Ely Consort to perform Beethoven’s 9th Symphony in the final concert of the Isle of Ely Arts Festival.

Ely Sinfonia gives two or three full orchestral concerts every year, frequently takes part in local events such as the Isle of Ely Arts Festival and, in addition, provides smaller groups to play at events such as the Easter Day orchestral mass in Ely Cathedral. Teaching is a vital part of the orchestra’s mission and it runs annual training days and workshops for less experienced players and students, coached by professionals.