The Story of St. Etheldreda 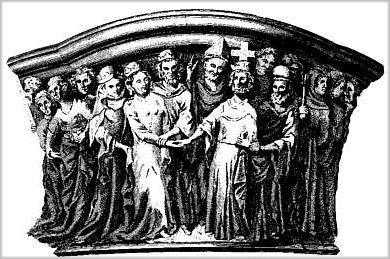 THE MARRIAGE OF ST. ETHELDREDA AND EGFRITH
From an engraving in Bentham`s History of one of the 14th Century carvings in the Octagon

In 597 A.D. St, Augustine, a great Roman missionary, came to Kent to try to convert the pagan Saxons to Christianity He was well received by the King of Kent and people all over the country became enthusiastic supporters of the new religion. Among them was Anna, the King of East Anglia, who lived at Exning, a village close to present-day Newmarket, and only about twelve miles from Ely. The King had four daughters, Etheldreda, Sexburga, Ethelburga and Withburga. It is the story of Etheldreda which concerns us most, though Sexburga and Withburga enter into the history of Ely as well.

Like her father, Etheldreda became an ardent Christian and would like to have devoted her life to religion, but for political reasons it became desirable to marry her to Tonbert, the Prince of the South Gyrvii, whose territory bordered East Anglia. The wedding took place in the year 652 and, as a dowry, Tonbert gave Etheldreda the land and royal rights of the Isle of Ely. Tonbert died three years later leaving Etheldreda a rich young widow but still anxious to pursue the religious life. For five years she lived on her estates, but once again policy necessitated her marriage to a prince, this time Egfrith, heir to the Kingdom of Bernicia in the north of England, Egfrith was much younger than Etheldreda and the marriage was not happy. After twelve years she obtained her husband's consent to retire from worldly affairs and she entered the convent of the Abbess Ebba, King Egfrith's aunt, at Coldingham, where she received the veil and clothing of a nun at the hands of Bishop Wilfrid. A year later she set out for the Isle of Ely. Egfrith pursued Etheldreda, but an inundation of the roads delayed him and she escaped. She had decided to renounce the world and enter a convent, and when she arrived at her estates she looked for a suitable site to build one.

At that time there was no one living where the city of Ely now stands, but there was a village named Cratendune just south of the present road from Ely to Witchford According to a tradition which cannot be traced back earlier than Norman times, a Christian church had been founded there by Ethelbert in 607, at the instigation of St, Augustine. Etheldreda chose a site about a mile to the north of Cratendune, and there she founded a monastery for both nuns and monks in the year 673 In those days it was easy for any one to set up a monastic establishment and obtain a charter with granted privileges The inhabitants of Cratendune abandoned their village and moved to the vicinity of the monastery. Thus it is possible to say exactly when Ely began to exist.

Etheldreda was assisted in her project by Bishop Wilfrid, whom she had met while living in Northumbria. It is from the Venerable Bede, who knew Bishop Wilfrid personally, that we have learned the story of Etheldreda. Bishop Wilfrid consecrated Etheldreda abbess of the monastery, which she continued to rule for some years, setting an example by her piety and disdain for comfort. Hot baths were regarded by her as a luxury and she took only about four a year, and those at times of important religious festivals She became a victim of plague which caused a large swelling in her throat. This was lanced by her surgeon, but she died on 23rd June, 679.

On account of her saintly life, it was decided to remove Etheldreda's remains from the grave where they had been buried to a tomb inside the abbey church. Sixteen years after her death the grave was opened in the presence of Bishop Wilfrid, her sister Sexburga, who had succeeded her as abbess, and several other witnesses. It was alleged that her body was found to be uncorrupted. In order to provide her with a suitable coffin, search had been made for a stone from which one could be made, but a Roman coffin of suitable size was found in Grantchester, near Cambridge The body was laid in this coffin and taken to a shrine in the church where it remained for nearly nine hundred years. 17th October, the date of her translation, or second burial, has been observed at her festival until the present day.

Etheldreda's sister Withburga, who had been one of her nuns, founded a nunnery of her own at East Dereham in Norfolk, not many miles away. At her death, Withburga's body was enshrined at Dereham, but in later times the Abbot and monks of Ely wished to have if at their own church with the relics of her sisters. The Abbot Brithnoth gave a feast at Dereham during which monks from Ely came by boat to Brandon and thence by road to Dereham, stole Withburga's body from the church and got it safely away before its loss was discovered. The body was landed at Turbutsea, a spot near the former Beet Sugar Factory, and as late as 1292 there was an entry in the Sacrist's Rolls "Paid for expenses on the feast of St, Withburga the Virgin at Tydbreye, (a variant spelling of Turbutsea) with the brethren and burgesses, 17s. 6d." This would represent more than £200 in our money and shows that the anniversary of the landing of the body of St. Withburga was kept up with considerable enjoyment. The three sisters, together with Eormenilda, daughter of Sexburga, lay in tombs grouped at the east end of the abbey church and attracted many pilgrims.

For some years the life of the monastery went on peacefully, but bad times were coming The Vikings, Danish pirates from the countries round the Baltic sea, began to invade the country in the same way that the Saxons, who were now settling down fairly peacefully, had done years before. They sailed up the rivers in their light shallow-draught boats, slew the inhabitants, stole their goods, and burnt their buildings, most of which were of wood.

Ely was one of the places which the Vikings burned in this way and from 870 for a hundred years the monastery lay in ruins while King Alfred and his successors fought the Danes or bribed them to stay away Finally a settlement was reached and more peaceful times came; the monastery was re-founded by Athelwold, Bishop of Winchester, who obtained permission from King Edgar, and purchased the property which had been the dowry of St. Etheldreda, to endow it. The royal rights were given to the monastery together with rights of two hundreds at Wicklaw in Suffolk, where Woodbridge stands to-day, and the hundred of Mitford in Norfolk. The new monastery at Ely was consecrated in 970 by St. Dunstan and flourished. It received favours from the Danish King of England, Canute, and a poem concerning an incident which occurred during one of his visits to Ely has been handed down to us it runs as follows:

Which may be literally translated:

Merrily sang the monks of Ely
As Canute the king rowed by.
Row nearer the land, knights,
And let us hear these monks sing.

We can believe that the singing was worth hearing, for at this period England was famous among the countries of Europe for the arts. Most of the lighter arts, such as goldsmiths' work, carving, embroidery, etc.. were produced in monasteries and there are records of many treasures at Ely, Peterborough and elsewhere.

The peace with the Danes was shortlived for they came again; but Cambridgeshire stood firm against them, and Ely escaped damage. Alderman Brithnoth set out to fight the Danes and met them in battle at Maldon in Essex, but lost his life. According to his wish. his body was brought to Ely for burial and his bones lie to this day in a niche in Bishop West's Chapel at the east end of the present Cathedral.

Aethelflaed. the widow of Alderman Brithnoth, presented the abbey with "a curtain woven and depicted with the deeds of her husband as a memorial of his virtue." It is thought by Mr, E. Maclagan in his book, The Bayeux Tapestry, that this curtain was a similar hanging to the famous Bayeux Tapestry which depicts the story of the visit of Harold to Normandy and the battle of Hastings The Bayeux Tapestry is later, and Bishop Odo, who is thought to have been responsible for having the tapestry made, probably saw the Brithnoth curtain when he was at Ely, and copied the idea.

Those were rough times and Ely became the refuge of men persecuted by their enemies. Men were cruel then, as they are now, and maimed or blinded each other. Sad tales have been passed down to us by the ancient chroniclers and singers of ballads. One ballad, in particular, tells how Alfred, the young son of King Ethelred, was blinded by Earl Godwin's orders, went to Ely for shelter, but died, and was buried in the abbey church.