You are here: Home1 / Contributors

Articles and stories by Elyonline contributors. 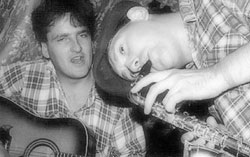 In 1982 Lee Gillett and John Glover formed a band – The Approachable Pigeons. Multi instrumentalist Lee had previously played in Herod’s Race, Wild Party Productions and other bands on the local scene. John had shouted for another local band, The Sokkets, and continued to write dodgy lyrics in his bedroom whilst listening to Elvis […]